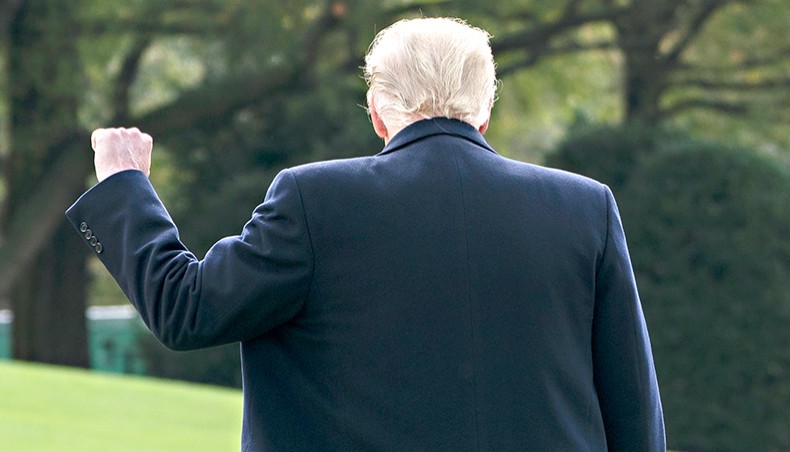 In this file photo former US president Donald Trump walks to Marine One after speaking to the press as he departs the White House in Washington, DC, on October 30, 2020. — Agence France-Presse/Andrew Caballero-Reynolds

FORMER US president Donald Trump will face the senate as an accused in an impeachment trial for the historic second time on February 8, this time as a former president. He will stand trial for ‘inciting an insurrection’ on the Capitol on January 6. The article of impeachment for Trump’s second senate trial is absurd and unbelievable but there is so much of damning evidence available to convict him of the heinous crime of which he has been accused that his trial would be an open-and-shut case before a jury anywhere.

Yet the 100 US senators who will sit as jurors will acquit him on pathetically partisan grounds. The Democrats, who hold the majority in senate but only because of vice-president Kamala Harris’s constitutional role to cast the tie-breaking vote in a 50–50 senate, will not get 17 Republican senators that they need to make up the 67 senators necessary to convict someone in an impeachment trial. Forty-five Republican senators have already voted against the trial as unconstitutional because Trump is no longer the president. They have also stated that there is no precedence to try a private citizen.

The Republican senators have taken shelter under the constitution of the United States of America on technicalities that are both untrue. They are afraid that the former president still has a stranglehold on the Republican Party. According to Fareed Zakaria of CNN, 70 per cent of the Republican Party’s base still backs him like a cult leader and is now more charged in his favour than before. The 45 senators have, thus, decided not to go against him in the trial to avoid the wrath of his base in 2022 mid-term and the 2024 presidential elections.

One hundred and ninety-seven of 211 Republicans in the house of representatives led by minority leader Kevin McCarthy are showing symptoms of the same amnesia as the 45 Republican senators for the same reason. They voted against impeaching Trump a week after they had been hostage themselves to the insurrectionists during their five-hour siege of the Capitol and had to hide for saving their lives. They heard these terrorists chant the names of speaker Nancy Pelosi and vice-president Mike Pence as they searched for them to hang them. They also saw loads of video footage in addition to their personal experiences when they voted against his impeachment in the house.

Kevin McCarthy suffered double amnesia. He flew to Florida to ‘kiss the ring’ of the former president and pledge loyalty to him as the party’s unquestioned leader and discuss the strategy to win the house in the 2022 mid-term election. He conveniently forgot that he had held the president responsible for the attack on the Capitol in his speech after the domestic insurrectionists had vacated the Capitol on the fateful night of January 6. And Kevin McCarthy’s handling of the polar opposite cases of representatives Liz Cheney and Margorie Taylor Greene underline that he and the Republican Party are suffering from something much worse than amnesia.

Representative Liz Cheney, daughter of Dick Cheney, an icon of the hardcore conservatives of the party, voted to impeach the president and, thus, incurred the anger of the president’s base. Margorie Taylor is still championing the president’s Big Lie and the Qanon conspiracies that the Democrats are led by a cabal that has a tryst with the devil and are paedophiles. She is also making some atrocious and insane claims that 9/11, Parkland school shootings, etcetera are ‘false flags’ to blame the Republican base.

Her claim absolves the al-Qaeda of responsibilities for 9/11. She blames Antifa for the January 6 insurrection. These are rants of someone whose sanity should be a matter of serious concern to all and the Republican leadership, in particular. Yet Kevin McCarthy cannot decide who to punish because Trump has backed Margorie Taylor’s rants unequivocally. The Republican Party is, thus, staring into a future with its moral and ethical compasses in utter disarray with Trumpism dominating over core conservative values of the Republic Party.

Senator Mitch McConnell, the most powerful Republican in the congress, has called Margorie Taylor a ‘cancer’ in the Republican Party. But he has also voted against Trump’s trial as unconstitutional, underlining that the Republican Party is in no danger of breaking. Trump has poured cold water on speculations that he would form a new party named ‘Patriotic Party’ or MAGA (Make America Great Again) Party. He assured Republicans in Congress that he had no intention of breaking the Republican Party, perhaps, to ensure that they acquit him as they did in his first impeachment trial.

All these developments are good news for the Democrats. They can look forward to the next four years with the freedom they never had for a very long time after suffering insult and ignominy at the hands of the president and the Republicans for four years. They can concentrate on strengthening their party and implementing their political, economic and social agenda, focusing, in particular, on the pandemic while the Republicans try to keep their party together with the elephant in the room.

These developments are not good for the United States. The country developed to the peak politically mainly because of taking the two-party democracy to near perfection, institutionalising it over centuries. The Democrats led the country’s liberal social, political and economic agenda while the Republicans the conservative agenda. The Republican Party’s conservative agenda has been badly and deeply infected by racism, white supremacist nationalism under president Trump. Thus, the country’s two-party system, crucial to the country’s future, is on its knees.

Groups spearheading racism and white nationalism that the Republican Party had hitherto kept on the outer fringes of the party and society have now come to its centre with the strength to take over the party. These groups have also brought to the country’s politics something that Americans did not consider possible in their worst nightmares, namely taking power through domestic terrorism. For the first time in modern US history, Americans also came face-to-face with the possibility of a military coup in transferring political power.

The stage is, meanwhile, ready for Trump’s trial. His first set of three lawyers left him when he insisted to pursue his ‘Big Lie’ in the trial. He found two new lawyers who will argue that the impeachment would not be constitutional because he is no longer the president. The legal/constitutional issues would, nevertheless, be irrelevant because the trial will be decided on purely partisan considerations. There is little chance that 17 Republicans would cross party lines to come out of their amnesia and act according to the conscience and their senses and the nation’s well-being.

The senate trial will, nevertheless, be a trial for the United States’s future. The Republican senators will have before them the antidote to the ‘cancer’ that Donald Trump has injected not just into the Republican Party but also the nation’s body politic. If they acquit him for their political gains in the 2022 and 2024 elections, they will pave the way for destroying the foundations of the US political system established painstakingly over centuries. They will, instead, encourage everything to the contrary, domestic terrorism, blatant racism and raging white nationalism, et al.

Postscript: Kevin McCarthy is scheduled to meet Marjorie Taylor Greene to decide her fate, in particular her membership of two key house committees, namely, education and labour, and budget. America would be waiting for the outcome.

M Serajul Islam is a former career ambassador. He writes from Maryland, USA.