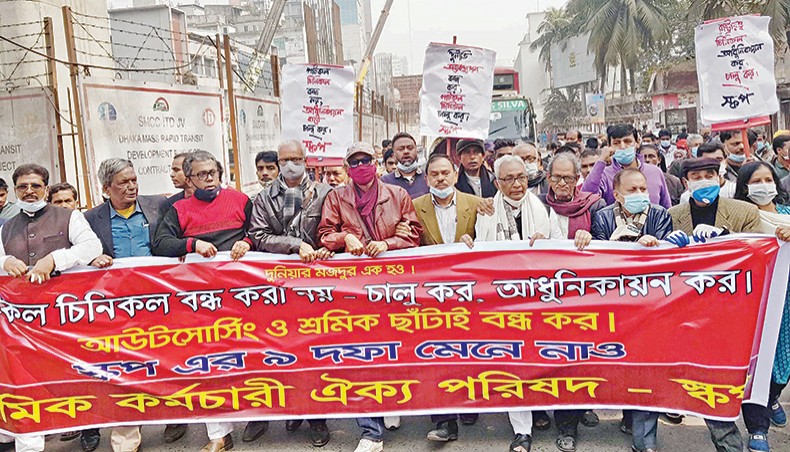 Sramik Karmachari Oikya Parishad on Tuesday urged the government to reopen all the 25 closed state-owned jute mills and to restart operation of the six government sugar mills in which processing of sugarcanes was suspended.

The organisation’s leaders pressed the demand in a rally in front of the National Press Club in Dhaka.

Speaking at the rally, the leaders said that the government had thrown over 50,000 families of the jute mill workers into uncertainty by closing the 25 mills on the recommendations of corrupt bureaucrats.

They said that the parishad had specifically showed that the mills could be profitable by modernising them by spending only Tk 1,200 crore.

Besides, the government had suspended processing of sugarcanes at the sugar mills as part its plan to close them, they said.

Instead of bringing corrupt bureaucrats to book, the government was encouraging the corrupt ones by closing the mills, they alleged.

The government closed all the 25 state-owned jute mills on July 2, 2020 and suspended the processing of sugarcanes in six mills out of 15 in an order on December 1 in the same year.