No let-up in city air pollution 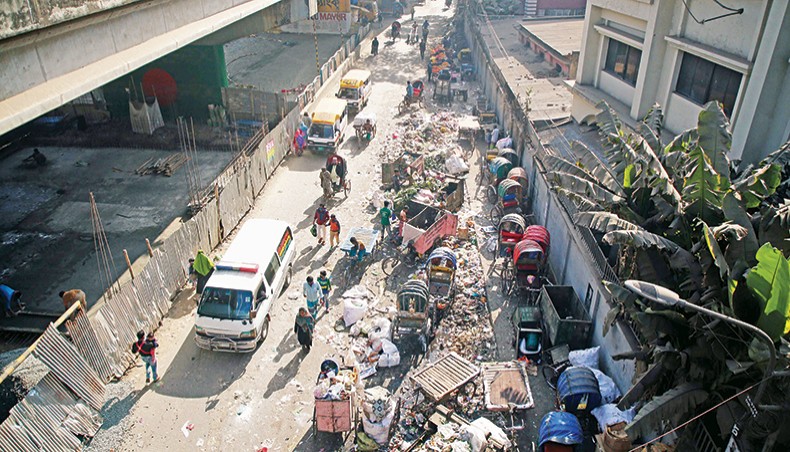 Rubbish collectors dump and sort wastes adjacent to a road of Mitford Hospital in Dhaka prompting concerns for hygiene and cleanliness. The photo was taken on Tuesday. — Sony Ramany

The air quality in the city of Dhaka has been extremely hazardous for public health for over 10 years as the government could not contain the sources of pollution despite taking various projects and plans.

According to greens and public health experts, the air quality score has remained four to seven times higher than the acceptable limit of 50 for most of the year for many years even after a Tk 802.25 crore clean air and sustainable environment project was implemented for the city.

Little improvement came from several policies and measures like introducing CNG-run vehicles, ban on import of old vehicles, assigning the city corporations to clean dusts from roads with suckers and by spraying water in the dry season, operating mobile courts to remove construction materials from open spaces and shutting down of illegal brick kilns, they said.

It is regrettable that the government agencies are continuously ignoring or failing to comply with the three High Court orders issued in the past 12 months for taking measures to control air pollution, said advocate Manzill Murshid, chairman of Human Rights and Peace for Bangladesh.

‘The agencies have recently admitted their limitations in their affidavits to the High Court following its latest order passed in November asking them to submit progress reports on the measures they have taken to contain air pollution,’ Manzill said.

Following a writ petition filed by the HRPB in public interest, an HC bench in January 2020 issued nine directives to the government to curb the capital’s air pollution by shutting down the brick kilns in and around the capital city in two months and banning the black smoke-emitting and life-expired vehicles.

The two Dhaka mayors were asked to submit compliance reports by March 2020 after ensuring that construction materials were covered by the contractors, the excavated roads were immediately repaired, no uncovered trucks entered the capital and water was sprayed on roads twice every day.

The court has also directed the Department of Environment to shut down within a month the factories that burned tyres and recycled batteries.

The court has further directed a 16-member environment ministry committee to submit to it within two months its compliance report on the 22 recommendations the court has made.

In February, 2020, another HC bench ordered the public administration secretary to provide magistrates to the environment department for operating mobile courts against polluters.

DoE director general AKM Rafique Ahammed did not respond though this reporter sent several short messages and called him at his personal and official numbers to seek an appointment for his comment on the matter.

But people of Savar and Dhamrai said that at least 14 closed-down illegal brick kilns resumed operation in December.  Similar complaints came from other districts like Manikganj and Narayanganj also.

Environment department officials further claimed that 76 per cent of the brick kilns were converted into environment-friendly operations while a 22-point instruction was passed to various agencies to curb air pollution.

They, however, admitted that an average air quality index value in Dhaka during the third week of January 2021 remained constantly above 370 while it was 172 on February 17, 2014, when the department started air quality monitoring under its recently-completed Tk 802.25 crore clean air and sustainable environment project.

The World Health Organisation has set the ideal air quality index value at 50 while an AQI value between 100 and 200 is regarded unhealthy, between 200 and 300 very unhealthy and above 300 extremely unhealthy.

In January, 2021, Dhaka had ranked as the worst city in the world for several days in the Air Quality Index as measured by IQAIR, a Swiss company that monitors air pollution across the globe.

The Environmental Performance Index of Yale and Columbia universities ranked Bangladesh 179th in the world for air quality in 2020, when the concentration of fine particles in the air was six times the WHO-recommended maximum, according to the The Guardian newspaper.

Air pollution was an extremely high-risk factor in the 5,72,600 deaths that were caused in Bangladesh by non-communicable diseases in 2018, according to a WHO analysis.

During the period, Dhaka city’s air had 379.4 micrograms of fine particles in each cubic metre, a proportion considered to be highly injurious to the lungs, which might also create chronic skin, kidney, stomach diseases and other complications besides organ failures.

According to a research published in the Cardiovascular Research journal in May 2020, air pollution shortens human life by up to three years while another research presented at the annual meeting of the European Society of Human Reproduction and Embryology in 2019 revealed that air pollution might affect the number of eggs ovaries could produce.

In the past month, a Bangladeshi asthmatic patient was granted asylum in France as the first ‘environmentally displaced’ person, anticipating possible premature death due to the dangerous levels of pollution in Bangladesh, several international media reported.

Dhaka University chemistry professor Md Abdus Salam said that the AQI value in the capital had been deteriorating over the past 25 years due to the increase in development work under government and private projects, uncontrolled carbon emissions from unfit vehicles, burning of leaves to make pithas, operation of brick kilns, rice mills, tyre recycling and iron rerolling mills without having proper filtering systems.

Only during the continuous rainfalls in the monsoon, he said, the AQI value goes under the WHO value of 50.

‘In the remaining days of the year the capital’s air is extremely unhealthy that contains hazardous chemicals like sulphur, sulphide, iron, nitrate, lead, cadmium and mercury in particle form,’ he said.

‘The situation deteriorates during the winter when rainfalls and refreshing air flow from the sea stop while the air flowing from the northern parts carry pollutants from the highly contaminated Indus-Ganges Plains covering parts from India, Nepal and China,’ Salam said.

But the government has failed to contain these factors by taking effective measures, he went on.

Salam said that he did not find any rationale for the construction of the environment department’s head office, construction of roads, sidewalks, drains, foot bridges, passenger sheds at bus stands, installation of traffic signals by the capital’s two city corporations and conducting feasibility studies for a proposed bus rapid transit project with a major share from the Tk 802.25 crore CASE project.

‘We see construction materials piled up on roads for the development of the metro rail project, city corporations’ construction work and hundreds of other private construction projects creating tons of dusts while carbon emission from vehicles and  smoke emissions for various purposes by the city dwellers continue,’ he lamented.

They claimed that they were using suckers instead of brooms to clean dusts and were watering roads twice a day.

But people of Mirpur, Badda, Mohammadpur, Jatrabari, Basabo, Khilgaon and Madartek said that they did not see use of any suckers and watering by the city corporations.

They resented that the areas became full of dust when the corporation cleaners cleaned roads with brooms.

They further said that contractors and private developers of both the city corporations kept construction materials on roads for days.

‘A city corporation contractor dug the Madartek Bazar road three months ago for developing the drainage system but is yet to remove the rubbish,’ a Madartek resident Rashed Sarwar said.

‘It is not even enacting the Air Pollution Control draft bill that provides for imprisonment of those polluting the air,’ she added.

Dhaka Mass Transit Company Limited secretary Md Abdul Wadud said that it would not be possible to cover construction materials as huge volumes of work were going on for the development of the metro rail.

‘But we are watering the adjacent areas regularly,’ he said.

Bangladesh Road Transport Authority chairman Nur Mohammad Mazumder could not be contacted for comment on the measures the agency has taken against unfit vehicles and to compel trucks to cover construction materials.

‘By 2025 all the government projects will be built with block bricks and thus the air-polluting brick kilns will automatically be shut down,’ Shahab said.

The ministry was holding meetings with the Local Government Division and the city corporations for punishing the contractors for not covering construction materials, he said adding that a notice was served on the metro rail authority.

Shahab said that the government had no plan to enact the air control draft bill, as per the cabinet’s desire.

‘We will amend the Environment Control Act to incorporate the main provisions of the air pollution control draft bill,’ he added.

But, he said, the government has nothing to do to prevent the polluted air flow from the neighbouring countries.