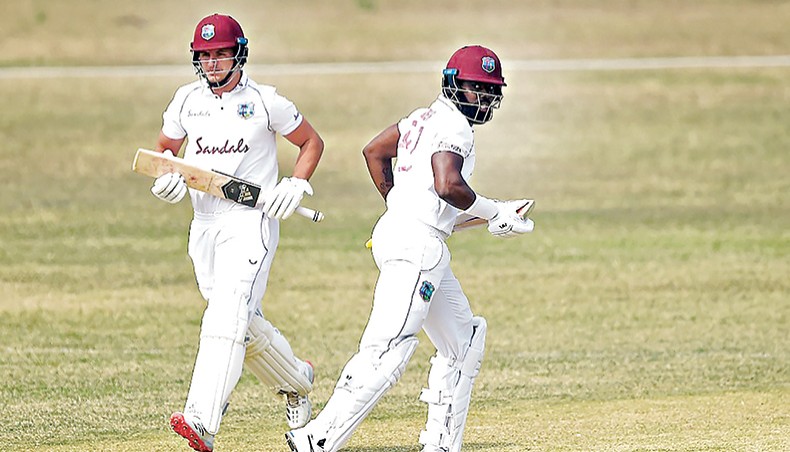 West Indies batsmen Raymon Reifer (R) and Joshua Da Silva run between the wickets on the third day of their three-day practice match against Bangladesh Cricket Board XI at the MA Aziz Stadium in Chattogram on Sunday. — AFP photo

Captain of the West Indies Test team Kraigg Brathwaite is satisfied with the three-day practice match against Bangladesh Cricket Board XI, which ended in a draw on Sunday, as both the bowlers and batsmen of his side managed to get in some crucial time at the middle before the Test series.

The West Indians finished the second innings at 291 with Nkrumah Bonner (80) and John Campbell (68) hitting fifties while Joshua Da Silva and Reymon Reifer also chipped in with 46 and 49 respectively late down order.

Chasing an improbable target of 289 in 29 overs, BCB XI ended on 63-2, with Yasir Ali and Shadman Islam unbeaten on 33 and 23 respectively as the match at the MA Aziz Stadium ended in an inevitable draw.

Brathwaite, who top-scored in the first innings with 85 and didn’t come out to bat in the second innings, was happy with the performance of his team in the practice game and thinks that they are ready for the Tests.

‘I am very happy. I thought the guys got a good bowl. The batters got two chances to bat. Some guys got good scores. Fast bowlers and spinners got to bowl in the second innings where we could get 29 overs in,’ Brathwaite said after the match ended.

‘So I am quite happy. We got ten wickets in the first innings, which was good. I think the guys are ready to go,’ he added.

Earlier in the match, the West Indians posted 257 in the first innings and earned a 97-run first innings lead on Day two when they bundled out the BCB XI for just 160 with off-spinner Rahkeem Cornwall claiming a five-wicket haul.

Brathwaite now feels that his team now knows how to take wickets and score runs in turning tracks and hopes to use these knowledge against the Tigers in the Test series, starting from February 3.

‘As a bowling unit we have to stick to the plans, bowl to the field. Create pressure with dot balls. Wickets will come. In terms of batters, including myself, I got a fifty in this game but I didn’t go on, so any batsman who gets set, the key is to get three figures. It will help the team get a nice total,’ he said.

On Sunday, the West Indians began the day 179-5 and swiftly Bonner to Khaled Ahmed, who failed to add any runs to his overnight score.

Khaled, who and Nurul Hasan were the only ones from the preliminary squad to miss the cut for the Test squad, took three wickets for the second straight innings while pacer Mukidul Islam was the pick of the bowlers with 4-59.