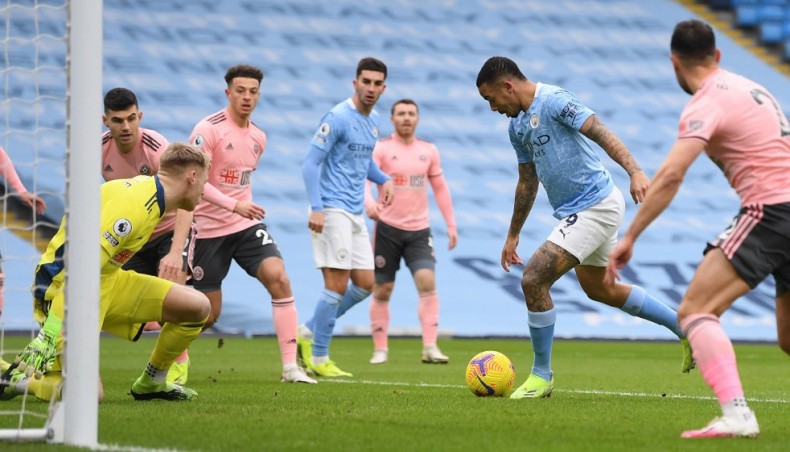 Manchester City opened up a three-point lead at the top of the Premier League as their 1-0 win over Sheffield United was followed by Manchester United's 0-0 draw at Arsenal on Saturday.

Gabriel Jesus scored the only goal inside the first 10 minutes at the Etihad as City extended their winning run to 12 games in all competitions.

Ferran Torres and Jesus were two of five changes made by Guardiola and they combined to make the breakthrough as the Brazilian tapped home for his first Premier League goal since November.

City failed to build on the lead, but comfortably held out for a 15th clean sheet in their last 19 games.

‘People think if we won the last one 5-0, we will win this one 5-0. This is the real world, not a fairytale,’ said City manager Pep Guardiola.

‘Today when I see Sheffield is bottom of the league. You see his team and realise how tough is the Premier League.’

Second-placed Manchester United could have moved back within one point of City if they had beaten Arsenal, but they had to settle for a dour stalemate in north London.

Edinson Cavani wasted a golden opportunity for United when the striker volleyed wide in the closing moments.

It was the second successive match United had dropped points in after their shock defeat against Sheffield United in midweek.

Ole Gunnar Solskjaer's men have won just one of their last four league games, stalling the momentum of their title challenge.

City also have a game in hand on their bitter rivals as the title race hots up.

Arsenal are undefeated in their last seven league matches and sit in eighth place, six points adrift of the top four.

Nicolas Pepe was inches away from putting them ahead late on, while Martin Odegaard, Arsenal's new loan signing from Real Madrid, was given a seven-minute debut cameo as a substitute.

At the other end of the table, Newcastle pulled clear of the drop zone with a first win in 12 games, beating Everton 2-0, while relegation rivals West Brom and Fulham played out a 2-2 draw.

Magpies manager Steve Bruce's future was under the spotlight after a wretched run that plunged his side into the relegation dogfight.

But Callum Wilson scored twice in the final 17 minutes to earn a deserved victory on a bad day for Carlo Ancelotti's men.

‘We were lazy, we were slow, we were not focused,’ said Ancelotti.

Everton were finally punished for a poor performance when Wilson lost his marker at a Jonjo Shelvey corner and looped a header across Jordan Pickford and inside the far upright.

Wilson was then denied by the post after rounding Pickford, but the former Bournemouth striker made no mistake when Newcastle countered quickly in stoppage time.

‘There's no disputing it -- it's been very difficult,’ said Bruce.

‘We're trying to be more on the front foot and push up the pitch. That's something we want to do more. We were a lot better.’

Bruce's men are now eight points clear of the relegation zone after a point each did little for West Brom or Fulham's battle to beat the drop.

The visitors were dominant in the first half at the Hawthorns and were made to regret not building on Bobby Decordova-Reid's opener.

Kyle Bartley levelled for the Baggies two minutes into the second half before new signing Mbaye Diagne teed up Matheus Pereira to turn the game around.

Ivan Cavaleiro's equaliser ensured Fulham remain above West Brom in 18th and edged to within four points of safety.

Crystal Palace eased fears they could be dragged into a scrap for survival as Eberechi Eze's winner earned the Eagles a 1-0 win over Wolves to move up to 13th.