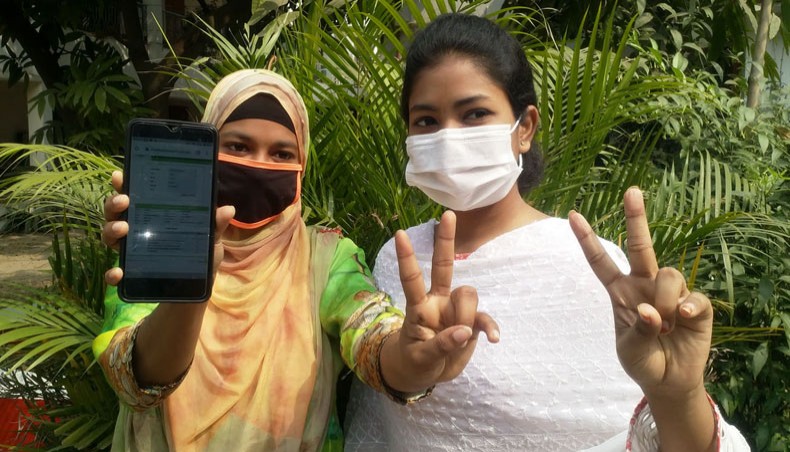 The results under 11 education boards came out on Saturday.

Both the average pass rate of 100 per cent and the number of GPA-5 winning students, about 11.83 per cent, set new records.

Results were sent to students through mobile SMS within a short time.

Prime minister in her speech requested everybody not to criticise the results as the government had no other option but to cancel the HSC and equivalent examinations amid COVID-19 outbreak as done by many  other countries.

‘Criticism of the results may put negative impact on students,’ she said.

Prime minister also thanked the education ministry and boards for developing a mechanism for preparing results on the basis of the students’ previous JSC and SSC results.

The HSC and equivalent examinations were scheduled to be held from April 1 to May 13, but were postponed later due to COVID-19 situation.

However, the examinations were cancelled on October 7, she added.

‘Students were awarded GPA 5 if they had obtained Grade Points of 5 in each of the selected subjects of the JSC and the SSC exams that we considered for converting their marks for publishing the HSC results,’ Dhaka Education board senior system analyst Manzurul Kabir told New Age on Saturday.

Because of the grace grades, which they got from the fourth subjects marks, 396 students secured GPA 5 in their SSC results but were not considered for GPA 5 in the HSC for not securing grade point of 5 in all the selected three subjects.

For irregular students, Manzurul said, marks of the subjects a student failed to pass in the previous HSC exams were calculated following the above said method while only SSC results were considered for private candidates.

The number of private candidates was 3,390 and 16,727 candidates registered for improvements.

The aggrieved students will have the chance to appeal review, education minister Dipu Moni said.

Education minister Dipu Moni together with education board officers poses for a photo at the HSC result hand-over and publication programme at the International Mother Language Institute in Dhaka on Saturday. — New Age photo