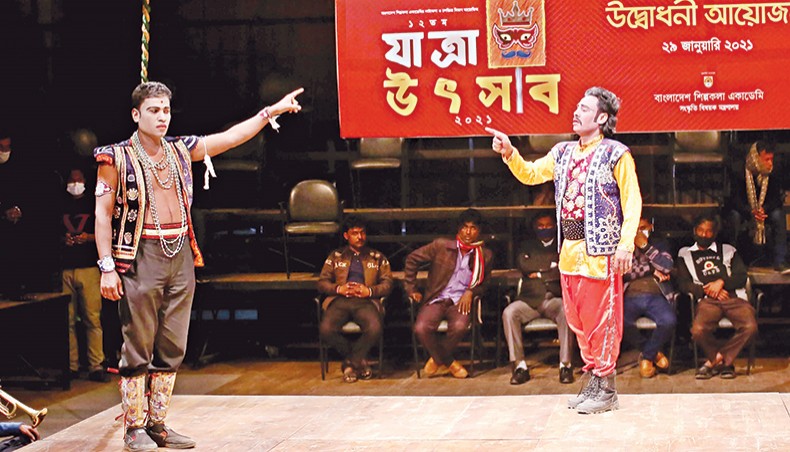 The four-day festival has been organised by Bangladesh Shilpakala Academy with the aim to promote Jatra, a popular traditional performing art form.

The jatra performances are being reviewed by a committee named Jatrashilpi Unnayan Committee.

The best troupes will be able to register themselves with the BSA, which has been organising the festival since 2012 to streamline the registration process for jatra troupes under the Jatra Development Regulation 2012.

In the previous editions of the festival, a total of 117 Jatra troupes from across the country have registered with the academy.

‘Besides, the academy is monitoring jatra troupes across the country and providing financial assistances to both jatra artistes and troupes,’ Purnalaaka Chakma added.

The festival is featuring 22 jatra productions by 22 jatra troupes from across the country.

Abdul Ali, A senior jatra artiste of The New Aleya Opera, said, ‘It has become extremely difficult for us nowadays to make a living as a jatra artiste. Earlier, we staged between 65 and 70 jatra performances across the country. But, the number of shows has been gradually decreasing. As a result, we have been facing financial hardship. I, along with my troupe members, came here to get enlisted with Bangladesh Shilpakala Academy.’

‘We are really happy to participate in the festival. I hope that we will be able to get our troupe registered,’ Abdur Razak, team leader of Bhashan Jatra Opera, told New Age

Jerin Akter, a young Jatra artiste, said, ‘I am very happy for getting the opportunity to perform the role of Behula at the festival. I began my journey as a jatra artiste in 2018. Earlier, I have depicted Behula in several jatra events across the country. I thank Bangladesh Shilpakala Academy for arranging this festival.’

Today, five troupes will stage jatra at the festival, which is open for all from 3:00pm to 10:15pm till February 1.