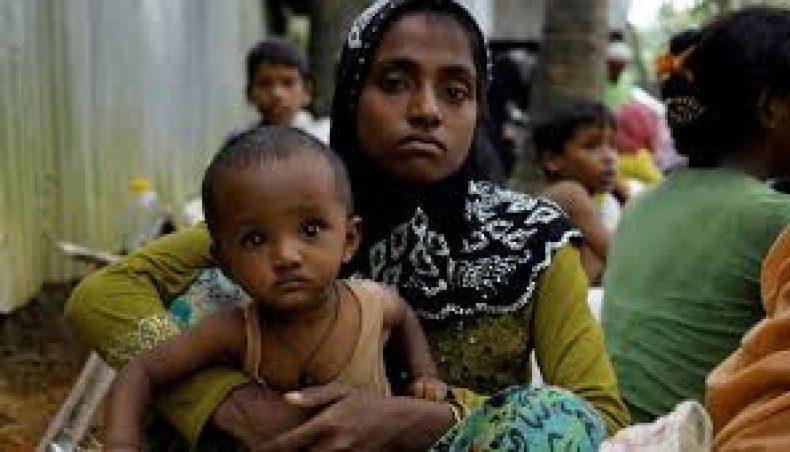 A Rohingya woman and her child pose for a photo at a Rohingya camp in Bangladesh. -- New Age file photo

Hundreds of Rohingya are missing from a refugee camp in Indonesia and are believed to have been trafficked to neighbouring Malaysia, officials and sources said Thursday.

Just 112 refugees remain at the makeshift camp in Lhokseumawe on Indonesia’s northern coast this week, well down from the almost 400 that arrived between June and September last year.

from Myanmar, who are feared to have enlisted traffickers to help them cross the Malacca strait into Malaysia.

‘We don’t know yet where they went,’ said Ridwan Jalil, head of the Rohingya taskforce in Lhokseumawe. ‘But they’ll escape if they can find any hole to leave because that is their goal.’

A Myanmar military crackdown in 2017, which UN investigators said amounted to genocide, forced 7,50,000 Rohingya to flee across the border into Bangladesh’s southeast coastal district of Cox’s Bazar, where many ended up in sprawling refugee camps.

Thousands have since paid smugglers to get them out of Bangladesh, enduring harrowing, months-long sea journeys punctuated by illness, beatings by traffickers and near-starvation rations to reach Indonesia and Malaysia.

At least 18 Rohingya from the Lhokseumawe camp and over a dozen suspected traffickers were recently caught by police several hundred kilometres south, in Medan city, a frequent staging point for illegal crossings into Malaysia.

More than 1,00,000 now live on the margins of society there, registered as refugees but not allowed to work, forcing the men into illegal construction and other low-paid jobs.

Some Rohingya men in Malaysia pay smugglers to bring over their families, or new brides from arranged marriages. The refugees in Indonesia were repeatedly asked to stay in the camp, the UN’s refugee agency said.

‘But (they) left despite our constant efforts to remind them about the danger and risks they could face by leaving — including if they used the services of smugglers,’ said UNHCR spokeswoman Mitra Suryono.

‘But we have to remember that many of (them) have relatives in other countries such as Malaysia. That may be one of the reasons why they continued their journey,’ she added.

Rights groups blamed the Indonesian government, which drastically reduced security at the settlement when the Rohingya were placed under the supervision of UNHCR last month.

‘The main reason for the exodus is security at the camp,’ said  Iskandar Dewantara, co-founder of the Geutanyoe Foundation, an Indonesia-based refugee advocacy group.

‘It’s fine if (the government) hands over the refugees to UNHCR, but it should continue supporting the agency in terms of providing security,’ he added.

While Indonesia is not a signatory to an international convention on refugees, the move was a breach of its obligations to protect them, said Usman Hamid, director of Amnesty International’s Indonesia office.

‘As long as they’re in Indonesian territory, then it is Indonesia’s obligation to give them protection,’ Hamid added.