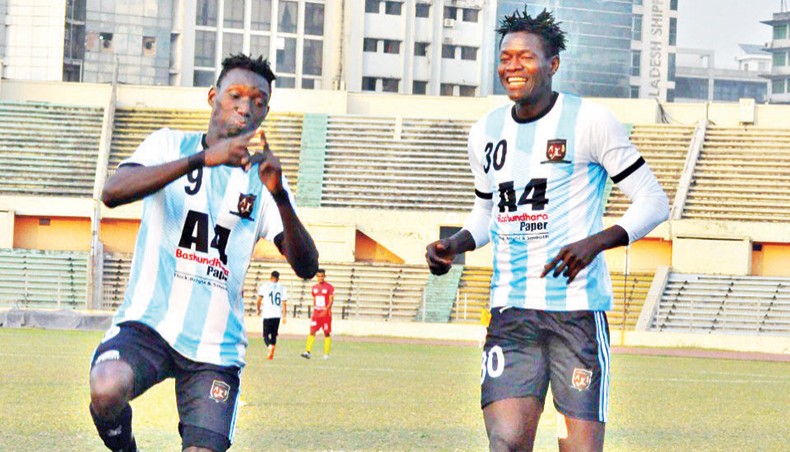 In the day’s other two matches, holders Bashundhara Kings beat Rahmatganj Muslim Friends Society 3-0 to earn their fourth successive win in Dhaka while in Tongi the match between Brothers Union and Uttar Baridhara ended in a 3-3 at the Shaheed Ahsan Ullah Master Stadium.

Jobe scored in the 14th, 60th, 62nd and in the stoppage time of the match while another Gambian Suleiman Sillah netted a brace for Jamal in the 18th and 35th minutes to secure the biggest win of the league so far.

For Kings, Brazilian forward Robson Da Silva converted a penalty in the 34th minute before Rahmatganj conceded an own goal in the stoppage time of the first half and forward Towhidul Alam Sabuj scored  his team’s third in the 86th minute.

Rahmatganj keeper Rusel Mahmud Liton brought down Argentine forward Raul Oscar Becerra inside the box and referee Anisur Rahman did not hesitate to award a penalty to Kings.

Forward and captain Sumon Reza, Uzbekistan midfielder Evgeniy Kochnev and forward Samin Yasir Juel scored one goal apiece for Baridhara in the 74th, 87th and in the stoppage time of the match.

After the day’s results, Kings remained at the top of the table with 12 points from four games followed by Sheikh Jamal with nine points from three games.