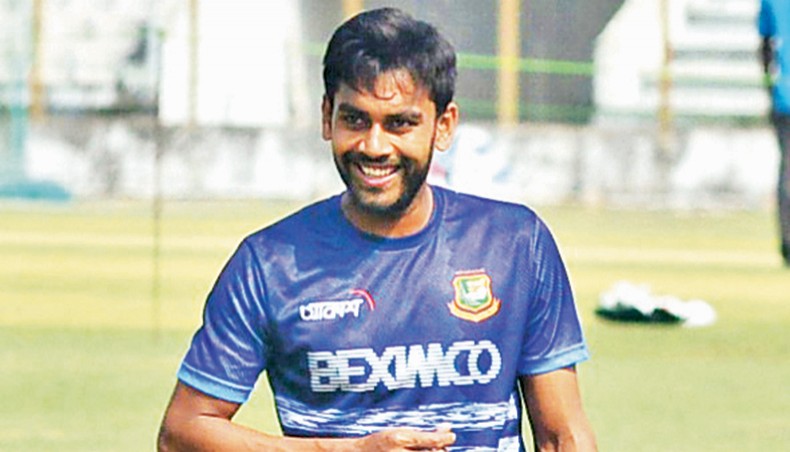 Exemplary performance with the ball against West Indies in the recently concluded one-day international series has catapulted Mehidy Hasan and Mustafizur Rahman in the top 10 of the ICC ODI bowler’s ranking, said a media release from the ICC on Wednesday.

Mehidy jumped nine spots to become the fourth ranked bowler in ODIs, his highest ever ODI ranking, and Mustafiz ascended to the eighth spot from 19th.

Mehidy was wary about his place in the ODI team before the series but ended up as the most successful bowler with seven wickets in three matches at an economy rate of 2.70.

The off-spinner is over the moon with this achievement and is overwhelmed with all the well wishes he is receiving from team-mates and fans.

‘All the praise belongs to Allah, I am feeling very happy. I did not think that I would be among the top five of ODI bowlers’ rankings. But when I got to know and the team-mates wished me I felt very happy,’ told Mehidy from the team hotel in a video message for the media.

Mustafiz ended up as the second highest wicket-taker in the West Indies series alongside Shakib Al Hasan with six wickets.

Mehidy is very happy with Mustafiz’s inclusion in the top 10 and thinks his rise in the rankings will further boost his confidence.

‘It is great news for us that Mustafiz is also among the top 10 ODI bowlers in the ranking. We all know how good he is. He is a world class bowler. He was instrumental behind many wins of Bangladesh,’ said the 23-year-old.

‘He badly needed this success because he was not in rhythm for some time and the team management worked really hard with him.

‘Mustafiz is one of my close friends. We played in the age level together, from U-16, U-18, U-19 to the national team. I am very proud of his success,’ he added.

Shakib retained his number one position in the ODI all-rounder’s rankings and widened the gap between him and second placed Mohammad Nabi, as he currently has 420 rating points, 126 more than the Afghan all-rounder.

The all-rounder is also 13th in the bowlers’ rankings and 24th in the batsmen rankings.

Mushfiqur Rahim sits on 15th position in the batsmen rankings, skipper Tamim Iqbal moved up one step to become 22nd and Mahmudullah jumped five places to reach the 49th position.

Due to the City Corporation election at Chattogram, both teams remained inside their team hotel and did not go to practice on Wednesday.