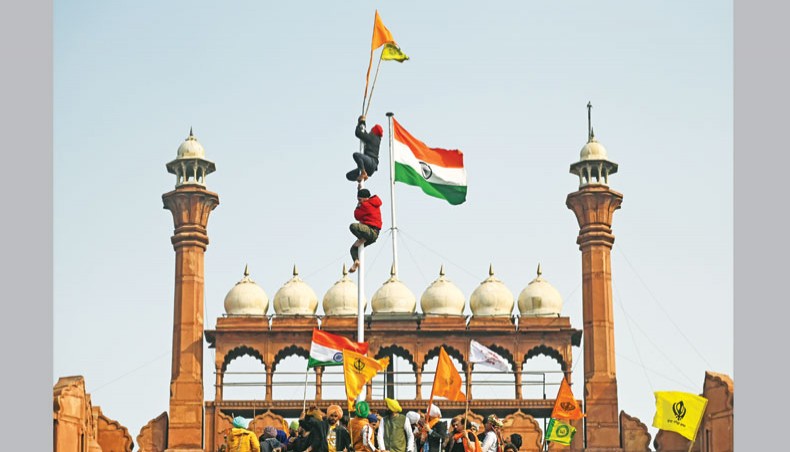 Protesters climb a flagpole at the ramparts of the Red Fort as farmers continue to demonstrate against the central government’s recent agricultural reforms in New Delhi on Tuesday. — AFP photo

Thousands of Indian farmers battled police across New Delhi Tuesday as they took protests against agriculture reform into the capital during a giant Republic Day military parade.

One farmer died after a speeding tractor overturned near the ITO junction in central Delhi, the police said, reports NDTV.

CCTV footage of the incident showed a blue tractor crashing through yellow Delhi Police barricades at high speed before rolling over twice and coming to rest by the side of the road.

However, some farmers at the site — near the Deen Dayal Upadhyaya Marg — claimed he was killed in police firing and began a sit-in protest.

Police laid on one of their biggest security operations in years in a bid to keep protesters away from prime minister Narendra Modi as he oversaw a parade full of pomp.

Police manned barricades at intersections around the centre of the city, while soldiers with machine guns patrolled metro trains.

But after barging through barricades on the city’s main arteries, convoys of farmers on tractors sped wildly around city roads, forcing police and bystanders to leap for safety.

At the 400-year-old Red Fort, protesters raised the emblem of their movement on flagpole where India’s tricolour normally flies.

Hundreds also gathered outside the Delhi police  headquarters and fought with officers.

Across the city, security forces fired tear gas and staged baton charges, but the protesters laid into police with their own weapons — and hijacked buses that had been used to block their convoys.

Two months of protests against agricultural laws that deregulated produce markets have turned into the biggest challenge faced by Modi’s Hindu nationalist government since it came to power six years ago.

The government had opposed the rally saying it would be a ‘national embarrassment’ at a time when it should be celebrating Republic Day.

Police, however, said they would allow the demonstration if farmers waited until after the military parade, and kept to a route away from central Delhi.

But barricades were breached while Modi and other ministers were watching tanks and troops pass along the Rajpath boulevard as newly acquired Rafale fighter jets flew overhead.

Some protesters reached a major intersection just three kilometres from the parade.

Modi was driven back to his residence barely 30 minutes before the farmers took over the city centre.

Tens of thousands of farmers have camped on the outskirts of the capital since November, protesting against the new laws which the government says will boost rural incomes.

Union leaders say they will allow private Indian conglomerates to take over the agriculture industry — the rock bed of the economy — and end guaranteed prices for most of their produce.

Farmers’ leaders say they have enough supplies to keep their protest camps going for at least a year.

The leaders blamed the authorities for the violence saying police had provoked the farmers.

‘When you attack a peaceful protest, then difficulties for the government will surely increase,’ union leader Kawalpreet Singh Pannu said.

He said a new protest would be held on February 1 outside parliament when the government announces its budget.

Earlier, on one main road leading into the city, people on rooftops threw petals on the tractor convoys. Elsewhere people cheered and applauded as the farmers went past waving Indian flags and blowing horns.

The parade was cut back this year because of the coronavirus pandemic, with the number of spectators reduced from 1 25,000 to 25,000.

The government says the farmers have been manipulated by opposition parties, which have largely backed the rural campaign.

Ten rounds of talks between farm unions and ministers have failed to break the deadlock.

Smaller demonstrations were also held Tuesday in Mumbai and Bangalore, and in the rural state of Haryana.

Police told petrol stations in the region around Bangalore not to sell fuel for tractors to farmers so they could not get to the protest, union leaders said.