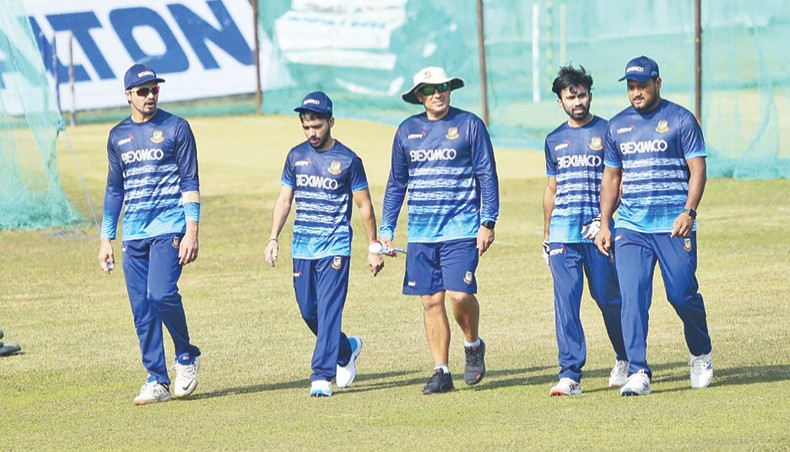 Bangladesh’s dominance over West Indies in the one-day internationals places them in a favourable position ahead of the Test series but their inconsistency at home in the longest format of the game and long sabbatical from red ball cricket could make the Test series a more competitive affair.

The three-match ODI series proved to be a cakewalk for the Tigers as the inexperienced West Indies side posed no real threat throughout the series and the hosts completed a comprehensive 3-0 sweep.

Bangladesh will now face the Caribbean side in a two-Test series, the first of which will take place at the Zahur Ahmed Chowdhury Stadium in Chattogram from February 3.

The visitors are still missing many of their regular Test players, as they decided to skip the tour for COVID-19 related concerns and personal reasons, but the number of newcomers in the Test side is significantly lower than the ODI squad.

Out of the 15 Caribbean players chosen for the Tests, four are yet to make their debut in the format whereas the number of newcomers in the 15-member ODI squad was nine.

While Bangladesh haven’t taken part in any Test or first-class game for over 10 months, their last Test being against Zimbabwe in February 2020, West Indies have played two Test series against England and New Zealand respectively.

Although a number of the players who featured in those series are missing in the side, seven players who were part of the West Indies’ squad in New Zealand, their last tour before the Bangladesh series, and are coming into the series very much in tuned with the challenges of the format.

Bangladesh’s record in the recent years also shows that the Tigers have a tendency of slipping up in Tests against teams they should be dominating at home.

The last time Bangladesh played a Test match in Chattogram was against Afghanistan in September 2019, where they were outplayed by the novice Test side in a rank turner and lost the match by 224 runs.

The year prior, Bangladesh again failed to win against a side ranked lower than them, when Zimbabwe beat them by 151 runs in Sylhet.

The West Indies attack also doesn’t lack in experience as it will be spearheaded by Kemar Roach, who has taken 33 wickets against Bangladesh in eight previous meetings, the sixth highest by a bowler against the Tigers in Tests.

The Caribbean side will be captained by opener Kraigg Brathwaite, who has three hundreds against Bangladesh in eight Tests and averages 47.71 against the Tigers, his highest against an opponent in the format.

At the time the report was filed, Bangladesh hasn’t announced their final squad yet and inclusion of star all-rounder Shakib Al Hasan is in doubt after he suffered a groin injury during the third ODI on Monday.

Bangladesh Test Mominul Haque also recently had an operation on his finger, pacer Abu Jayed and spinner Nayeem Hasan also came out of the injury recently and the trio were not part of the ODI squad.

Bangladesh has more than a few chinks in its armour in the longer format which, if exploited, could bring their downfall in the series and add another match in the Tigers’ long list of embarrassing defeats in Tests.