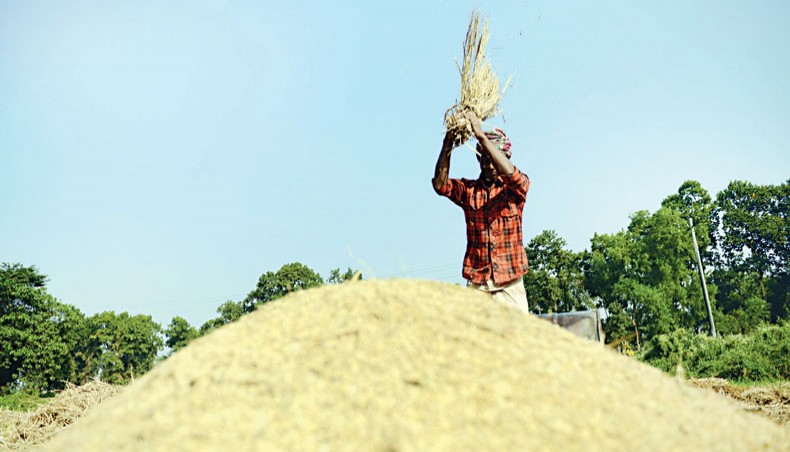 A file photo shows a farmer threshing paddy on the outskirts of Dhaka. Farm loan disbursement by banks increased by 18.31 per cent or Tk 1,977.2 crore year-on-year in the first half of the current fiscal year 2020-2021 as farmers began cultivation of rabi crops after being hit hard by excessive flooding during monsoon.— New Age photo

Farm loan disbursement by banks increased by 18.31 per cent or Tk 1,977.2 crore year-on-year in the first half of the current fiscal year 2020-2021 as farmers began cultivation of rabi crops after being hit hard by excessive flooding during monsoon.

The central bank’s pressure on the banks to expedite disbursement of loans to the farmers was another reason behind the increase.

The latest Bangladesh Bank data showed that the banks disbursed Tk 12,077.98 crore in July-December of FY21 against Tk 10,800.8 crore disbursed in farm loans in the same period of the previous year.

Considering the farm loan disbursement target of Tk 26,292 crore set by the central bank for FY21, the banks were supposed to disburse Tk 2,191 crore on an average whereas credit issuance to farmers stood at Tk 2,013 crore.

In the first half of FY21, the schedule banks disbursed 45.94 per cent of their annual target against disbursements of 44.77 per cent in the same period of FY20.

The growth rate, however, gradually declined in the months September, October and November.

The situation improved with a spike in demand for farm loans as the farmers started to borrow money for cultivation.

As agriculture plays a vital role in the country’s economy, issuing credit to the farmers has become crucial to keep the agriculture-based rural economy vibrant at a time when the industry and service sectors are struggling to recover from the impacts of the coronavirus outbreak, the officials said.

As much as 40.6 per cent of the country’s workforce is directly employed in the agriculture sector.

As floods hit farmlands across the country in June and a huge section of the population is directly or indirectly involved in agriculture, the central bank directed the banks to increase disbursement of the farm loans.

As part of the measures taken, the central bank asked the banks amid the flooding to ensure hassle-free and speedy loan facility for the flood-hit famers as per their demands.

The instruction issued on July 23 asked the banks to issue credit facility to the farmers so that they could start incomegenerating activities such as poultry and cattle farming and feed production.

The banks were also directed to reduce dependency on microfinance institutions in releasing the farm loans as the method costs the farmers more than 20 per cent in interests.