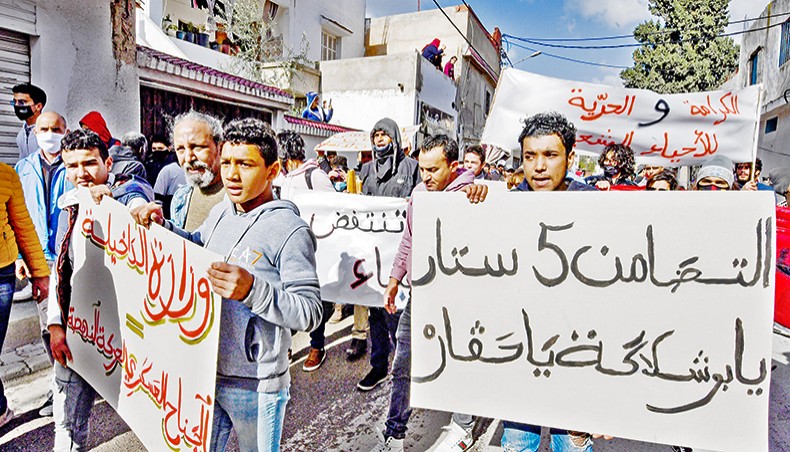 Protesters from the Ettadhamen city suburb on the northwestwern outskirts of Tunisia’s capital Tunis march on Tuesday in a bid to pass onwards to reach an anti-government demonstration outside the Tunisian Assembly headquarters. — AFP photo

Protesters clashed with police in the central Tunisian town of Sbeitla on Monday, after a young man hit by a teargas canister during clashes last week died in hospital.

Soldiers were deployed in front of the government buildings, the latest in a string of demonstrations to have rocked the North African nation this month.

Haykel Rachdi died on Monday afternoon at a hospital in Sousse, hospital director Chawki Ben Hamouda said, without specifying the cause of his death.

Tunisia has seen a recent wave of nighttime clashes, with security forces carrying out mass arrests, amid an economic collapse exacerbated by the coronavirus pandemic and lockdown measures.

Sbeitla, in the central region of Kasserine, had already seen clashes last week after rumours that Rachdi had died.

At that time, the interior ministry denied that he was dead and announced an investigation into the circumstances of his injuries.

The government on Saturday extended a night-time curfew from 8 pm to 5 am, and banned gatherings until February 14.

It comes as parliament is set to vote on new ministers appointed in a sweeping cabinet reshuffle by prime minister Hichem Mechichi.

President Kais Saied on Monday criticised the absence of women in the new line-up and pointed out that the reshuffle had not been examined by the council of ministers, as the constitution demands.

Without naming names, Saied also said one of the proposed ministers was ‘involved in a corruption case’ and that three others had conflicts of interest.