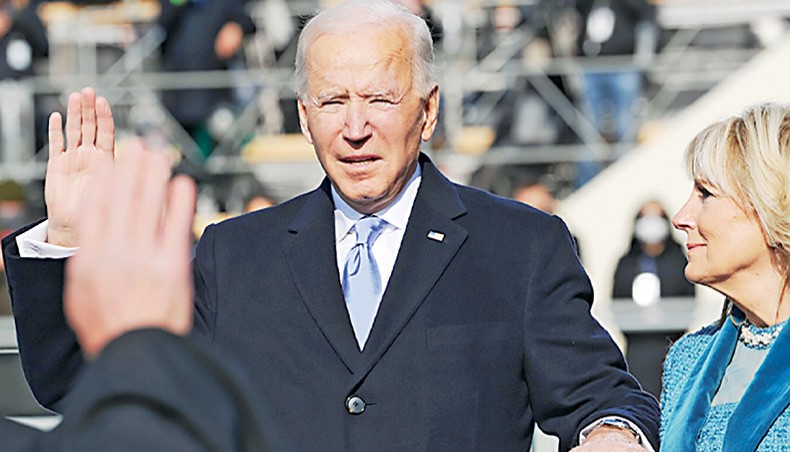 Joe Biden takes the oath of office as president at the Capitol on January 20, 2021.  —Wikimedia Commons

IT WAS inevitable that president Joe Biden would betray numerous of his campaign promises — and those that mattered most to wide-eyed voters who put him in office. The speed at which he and his people have revealed their treachery is nonetheless stunning.

No, there will be no comprehensive stimulus plan until at least the spring, if then. No, relief checks are not ‘going out the door immediately,’ and no, they will not be for the $2,000 to which Biden committed his administration. As to Biden’s health care reforms, one can hardly believe one’s eyes and ears.

As Andrew Perez and Julia Rock reported in Jacobin last week, Biden’s plans are literally lifted from a letter health-insurance lobbyists recently sent Capitol Hill legislators. The promised public option is out the window. Health care ‘secure for all?’ These people do have bridges they intend to sell you.

All this within a few days of Biden’s ascendancy. It’s not much different on the foreign policy side, so let’s draw the old lesson. You can have democracy at home or empire abroad, but you can’t have both. We will continue to suffer the latter under Joseph R Biden, Jr.

Those drawn into thinking the Biden regime would conduct America’s affairs abroad decently and humanely and in principled fashion will now discover they have been savagely sucker-punched. Those who understood from the outset that Biden’s people would go nowhere near the essential, determining questions of exceptionalism, universalism, and our consequent dedication to empire will be repelled but not surprised as the policy framework is revealed.

In this case, the moment of truth came even before Biden’s inauguration. His saccharine inauguration speech last Wednesday, with its Hallmark-card calls for unity, was quite secondary to the confirmation hearings the Senate Foreign Relations Committee held the previous day.

In a matter of hours, Biden’s key national security people — Antony Blinken as secretary of state, Avril Haines as director of national intelligence, and Lloyd Austin as defence secretary — gave us a remarkably fulsome idea of what we are in for these next four years.

Haines and Austin, neither of whose records are to be admired, are at bottom functionaries who were nominated and swiftly confirmed because they do what they are told and do not think too much — always a career-advancer in Washington.

It is instead Blinken, who is said to enjoy some kind of ‘mind-meld’ with Biden that we must consider carefully. (Such a meld must be odd terrain.)

Blinken’s senate testimony last Tuesday sprawled over four hours. It is best to scrutinise his remarks while seated in a chair with sturdy armrests, ideally to calm one’s nerves with a pot of chamomile tea.

Seen or read as a whole, those four hours gave us an extraordinary display of how empire works and how it prolongs itself. One by one, Blinken’s senatorial interlocutors told him in so many words, ‘Son, this is what you need to say if you want our confirmation. We want you to endorse our commitment to aggression, to unlawful interventions, to ‘regime change’ ops, to merciless sanctions, and altogether to the empire. But you must make it look nice. Make it look thoughtful and complicated and considered.’

I am convinced, having endured the entire C–Span recording, that what I watched was sheer ritual. Blinken won the Senate’s support and now succeeds the shockingly bovine Mike Pompeo at state. He will do so, however, with the élan and faux sophistication our nakedly bankrupt foreign policy now requires if the American pantomime is to be sustained another four years.

Among Blinken’s many rather sad-to-witness ‘Yes sirs,’ two standout: his finely chiselled endorsement of Pompeo’s reckless assassination a year ago of Qassem Soleimani, Iran’s revered military commander (‘Taking him out was the right thing to do’), and his approval of the Trump administration’s decision to send lethal arms to the manically corrupt regime in Kiev (‘Senator, I support providing that lethal defensive assistance to Ukraine,’ when the Obama administration, from which he comes, did not.)

Late last year, Blinken appeared on ‘Intelligence Matters,’ the podcast run by Michael Morrell, the coup-mongering former deputy director at the Central Intelligence Agency and now — of course — a regular commentator on the televisions news networks. In their exchange, the two took up the question of our ‘forever wars’ and Biden’s well-advertised commitment to ending them. Here is a snippet from Blinken’s remarks:

‘As for ending the forever wars, large-scale deployment of large, standing U.S. forces in conflict zones with no clear strategy should and will end under his [Biden’s] watch. But we also need to distinguish between, for example, these endless wars with large-scale, open-ended deployment of U.S. forces with [sic], for example, discreet, small-scale sustainable operations, maybe led by special forces to support local actors. In ending the endless wars we have to be careful not to paint with too broad a brushstroke.’

This is what we are in for these coming years, the hyper-rational irrationality of the middling technocrat. There will be adjustments at the margin, reconsiderations of method. There will be no consideration whatsoever of America’s hegemonic objectives — of the imperial project.

Changes to the Iran deal

OF THE various questions the new secretary of state took up during his confirmation hearings, Iran is the most pressing. Senator Bob Menendez, Blinken’s interlocutor in this case, insisted that yes, the US wants to rejoin the 2015 accord governing Iran’s nuclear programs, but only if this includes prohibitions against Tehran’s ‘destabilising activities’ and a missile program that Iran justly considers essential to its security.

An honest, clear-eyed diplomat who wanted to get somewhere with Tehran would have rejected the very frame of Menendez’s line of inquiry, with its references to ‘support for terrorism’ and ‘funding and feeding its proxies.’ But Blinken read his cues and tucked right in:

‘The president-elect believes that if Iran comes back into compliance we would, too, but we would use that as a platform… to seek a longer, stronger agreement and also, as you have pointed out, to capture these other issues, particularly with regard to missiles and Iran’s destabilising activities. This would be the objective.’

This is sheer charade. Blinken knows as well as anyone else that the added conditions the Biden regime will require before rejoining the agreement — an end to Iran’s ballistic missile programs and its support for the Syrian government against Islamists and the illegal US incursion — effectively cancel all chances that the US will rejoin the accord.

I predicted in this space shortly after Biden was elected that he and his foreign policy people only pretended to be serious about reviving the nuclear agreement with Iran. Blinken’s testimony confirms this.

Over the weekend The Times of Israel, citing Channel 12 television, reported that prime minister Benjamin Netanyahu is sending Yossi Cohen, chief of Mossad and a close confidant, to Washington to ‘set out terms’ for any revival of the nuclear deal. Israel purports to ‘set out terms,’ and Biden will receive this spook? This is getting completely unserious. Completely.

On China, Russia, and Venezuela: Blinken was putty in the hands of the Foreign Relations Committee’s across-the-board hawks. A two-fronted new Cold War across both oceans — Sinophobia and Russophobia all at once — is to be our reality these next four years.

Over the weekend, to be noted, the American embassy in Moscow had the gall to broadcast routes protesters could take to demonstrations in various Russian cities to dispute Alexei Navlany’s arrest . A good start.

Marco Rubio, the coup-loving senator from Florida, wanted to know if Blinken thought the US should continue backing Juan Guaidó, the buffoon Rubio and Pompeo puffed up as Venezuela’s ‘interim leader’ as part of a failed coup operation a couple of years ago. Blinken:

‘I very much agree with you, senator, first of all with regard to a number of the steps that were taken toward Venezuela in recent years, including recognising Mr Guaidó… and seeking to increase pressure on the regime…. We need an effective policy that can restore Venezuela to democracy, and how can we best advance that ball? … Maybe we need to look at how we more effectively target the sanctions that we have….’

Grim, grim times lie ahead if Blinken runs state as he promised the senate he would.

There are those among us who look for shafts of light. People I greatly respect (some, anyway) thought it was good news when Biden named William Burns, a career foreign service officer, to head the CIA. At last diplomacy, not unlawful interventions!

Over the weekend, there were reports that Biden will review — not more at this point — the designation of Yemen’s Houthis as terrorists, a label Pompeo affixed as he emptied his desk last week. Finally, we will stop supporting the Saudis’ savagery!

People believe what they need to believe these days, I find, and belief overrides cognition in many such cases. I caution these people. At bottom Blinken demonstrated for us that no one who purports to alter our imperial course will ever be allowed to hold high office. For people such as Blinken, it is merely a question of wielding influence without having any.

This is where Americans live — in a crumbled republic no longer capable of changing.

ConsortiumNews.com, January 25. Patrick Lawrence, a correspondent abroad for many years, chiefly for the International Herald Tribune, is a columnist, essayist, author and lecturer. His most recent book is Time No Longer: Americans After the American Century.