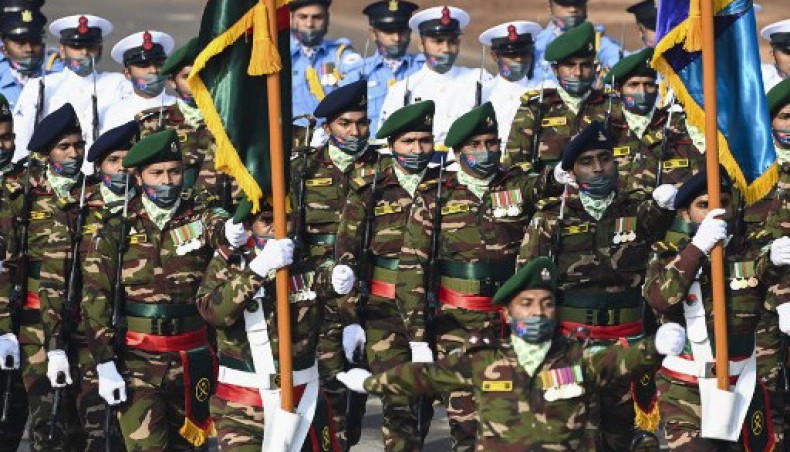 In a first, a Bangladeshi tri-service contingent led India’s Republic Day parade on the iconic Rajpath in the heart of the national capital Tuesday.

The 122-member Bangladeshi armed forces contingent led the first 10 rows of India’s 72nd Republic Day parade to commemorate 50 years of the 1971 Liberation War, which led to the liberation of Bangladesh from Pakistan.

The tri-service contingent, led by Lieutenant Colonel Mohatsim Haider Chaudhury, comprised of the Bangladesh Army in the first six rows, followed by two rows of the Navy and two rows of the Air Force in the end.

‘The Bangladesh contingent will carry the legacy of legendary Muktijoddhas, who liberated Bangladesh in 1971,’ the Indian defense ministry said earlier.

The Indian Navy’s tableau also showcased models of Indian Naval Ship Vikrant and sea operations that were conducted during the 1971 India-Pakistan war.

In another first, an Indian Air Force woman fighter pilot — Flight Lieutenant Bhawana Kanth — scripted history by becoming the first female armed forces personnel in a combat role to participate in the flypast.

India honours January 26 every year, the day on which the country’s Constitution came into effect in 1950, replacing the Government of India Act (1935) as the governing document and thus, turning the nation into a newly formed republic.

And for the first time in over five decades, India did not have a foreign leader as the chief guest at its Republic Day parade.

India had invited British prime minister Boris Johnson for this year’s Republic Day parade, but he cancelled his visit on January 5 amid a surge in COVID cases at home.

The last time India did not invite any foreign leader was in 1966 due to the sudden demise of then prime minister Lal Bahadur Shastri, following which Indira Gandhi was sworn in as the country’s first female PM on January 24 that year, two days ahead of Republic Day.