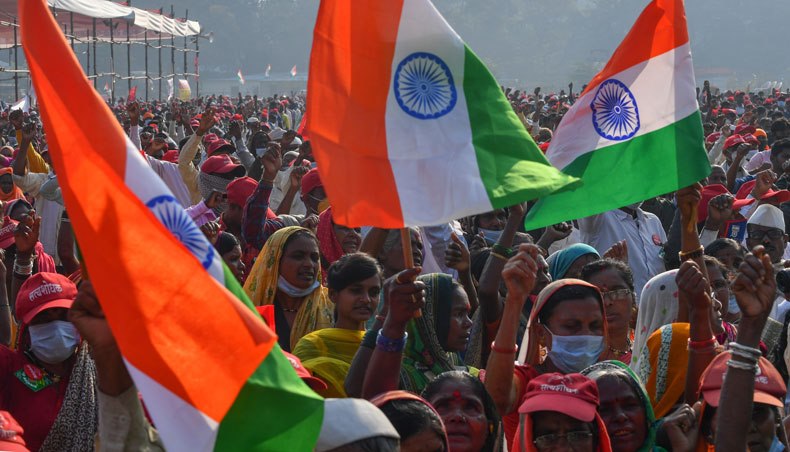 Farmers of Maharashtra state shout slogans during a rally to support protesting farmers against the central government’s recent agricultural reforms in Mumbai on January 26, 2021. — AFP photo

Thousands of Indian farmers, many on tractors, breached police barricades to launch a protest march into New Delhi on Tuesday as the government held its main Republic Day military parade.

Police imposed one of their largest security operations in years to stop the demonstrators, who oppose agriculture reforms they say will decimate their livelihoods.

Authorities had agreed to let tens of thousands of farmers stage a tractor rally as long as they waited for the military parade to finish.

But flag-waving farmers on at least three major roads overran security and pressed on into the city. Police, who put up barricades of containers and trucks, fired tear gas on at least two groups.

‘We are going to show the government that we mean business,’ said protester Nareesh Singh as he revved up his tractor at Singhu on the edge of Delhi.

Long queues of tractors built up at other key roads into the city, where farmers have been camped for two months protesting new laws which deregulate produce markets.

The government said that the reforms will boost rural incomes, while the farmers said they will allow Indian agriculture to be taken over by major conglomerates.

They have demanded the government repeal the laws, but the Hindu nationalist administration of prime minister Narendra Modi has only offered to delay implementation for 18 months.

Police manned barricades at intersections around the centre of the city while soldiers with machine guns were on many metro trains.

The parade — around 25 kilometres from the protests — had been cut back this year because of the coronavirus pandemic, with the number of spectators on the Rajpath boulevard leading up to the main government complex reduced from 125,000 to 25,000.

Modi sent out Twitter greetings for the national holiday without mentioning the farmers.

Smaller farmer demonstrations were held in Mumbai and Bangalore.