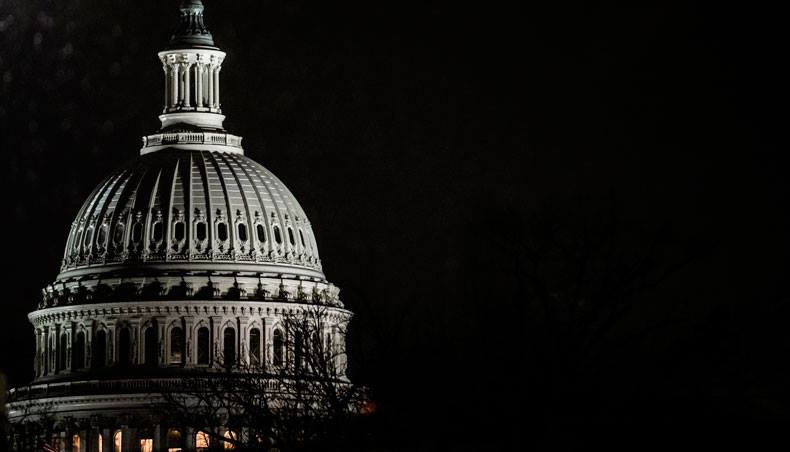 Snow falls around the US Capitol after the House impeachment managers delivered the articles of impeachment to the Senate on January 25, 2021 in Washington, DC. — AFP photo

The US Supreme Court on Monday shut down lawsuits claiming Donald Trump violated constitutional bars against a president accepting income from foreign sources.

The justices at the nation’s top court refused to take up the cases and instructed lower jurisdictions to drop the matter, noting they were moot now that Trump had left the White House.

These cases stemmed from the ‘emoluments clause’ of the US Constitution, which prohibits public officials from receiving gifts, payments or titles from foreign states without permission from Congress.

In these cases, plaintiffs in the most visible lawsuit alleged the clause was violated when foreign delegations patronised the Trump International Hotel, near the White House, in an effort to curry favour with the Republican president.

The real estate mogul-turned-president entrusted the management of his businesses to his sons after inauguration in 2017, though Trump held onto his shares in the Trump Organisation, which brought in $435 million in revenue in 2018.

The now ex-president and the justice department argued that the emoluments clause is intended to stop public officials from taking bribes, not from carrying out regular functions of business, as Trump claimed.

Despite the ruling in this case, Trump still faces legal jeopardy on multiple fronts.

His impeachment trial is due to open next month before the Senate on a charge that he incited the mob that attacked the US Capitol in an effort to undo his election loss to Joe Biden.

Authorities were also probing payments made to two of Trump’s alleged ex-mistresses in 2016, which may have violated campaign finance laws.