Numbers of the Match 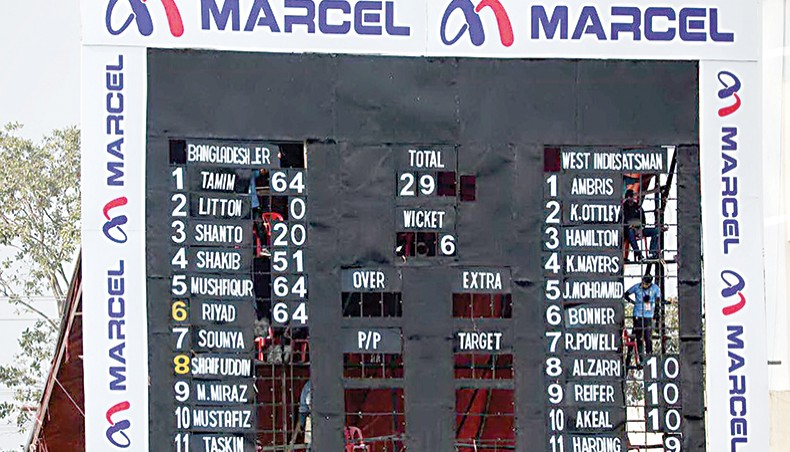 The scoreboard shows the Bangladesh innings during their third and final one-day international match against West Indies in Chattogram on Monday. — BCB photo

3 — For the third time in one-day internationals, four Bangladesh cricketers scored over fifty runs in one innings in their third ODI against West Indies in Chattogram. Tamim Iqbal, Shakib Al Hasan, Mushfiqur Rahim and Mahmudullah struck fifties on Monday. The same four players earlier scored fifties against Scotland in the 2015 ICC World Cup. It happened for the first time in 2014 against Pakistan, when Mushfiq, Imrul Kayes, Mominul Haque scored fifties and Anamul Haque scored a 100 in an Asia Cup match.

88 — Keon Harding became the most expensive bowler on debut for West Indies after leaking 88 runs in his 10 overs for no return against Bangladesh on Monday. The record was previously held by Oshane Thomas, who conceded 83 runs against India on debut in October, 2018.

221 — Mushfiqur Rahim played his 221st ODI for Bangladesh on Monday and overtook Mashrafe Bin Mortaza as the most capped Bangladeshi cricketer in the format. Mashrafe played 218 ODIs for Bangladesh and two for the Asia XI while all of Mushfiq’s ODI appearances were for the Tigers.

297 — Bangladesh scored 297-6 in the final ODI of the three-match series on Monday, which is their highest team total in ODIs against West Indies at home. Bangladesh’s previous highest total came in December 2012 in Khulna when they scored 292-6 against the Caribbean side.

500 — Tamim Iqbal hit his 49th ODI half century on Monday and in the process also became the first player to score over 500 runs in ODIs at the Zahur Ahmed Chowdhury Stadium in Chattogram. Tamim needed just three runs to reach the landmark and now has 561 runs at his home town venue.