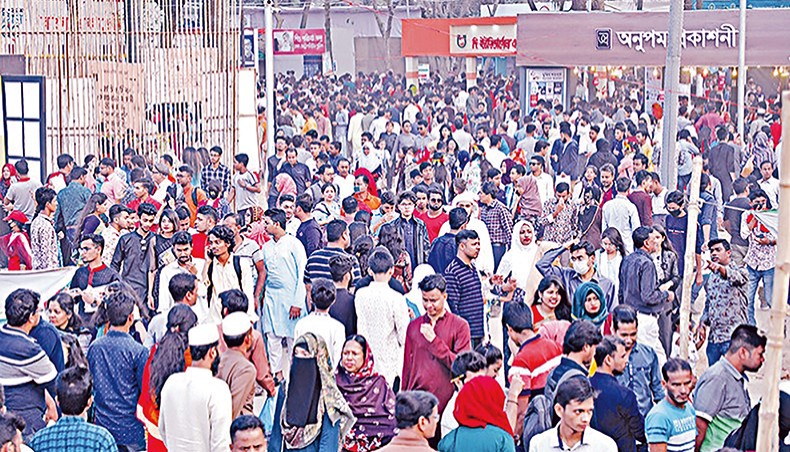 Braving the on-going COVID-19 crisis, Bangla Academy will lift the curtain on the Amar Ekushey Book Fair 2021 on March 18.

‘The Amar Ekushey Book Fair will begin on March 18. We will inform more details regarding the fair later,’ Habibullah Siraji told New Age.

The fair’s duration will be decided at a meeting of the fair organising committee.

Academic and Creative Publisher’s Association of Bangladesh president and the owner of Somoy Prakashan Farid Ahmed said, ‘The Amar Ekushey Book Fair will begin from March 18 as per decision of the prime minister. The fair organising committee will hold a meeting regarding the fair shortly. We will discuss about the duration of the fair at the meeting.’

Earlier, state minister for cultural affairs KM Khalid at a press conference held at Bangla Academy on January 17 announced that the Amar Ekushey Book Fair 2021 will be held at usual venues following health guidelines. Three proposed launch dates - February 20, March 7 and March 17 – were forwarded to the prime minister’s office for a final decision.

Across the world different book fairs scheduled to be held in 2021 were postponed due to the global COVID-19 pandemic. In December 2020, Bangla Academy proposed for organising a virtual book fair considering the COVID-19 situation while the publishers demanded that the Amar Ekushey Book Fair 2021 should be held at the usual venues with cautionary measures.

Litterateurs have urged the authority concerned to ensure the safety of visitors at the Amar Ekushey Book fair.

Poet-essayist Razu Alauddin said, ‘I applaud the decision of Bangla Academy to organise the Amar Ekusheu Book Fair from March 18 instead of February. However, human life is invaluable. We have to make sure that people can visit the fair safely. Bangla Academy should take steps for preventing huge gatherings in front of book stalls.’

Poet Shakhawat Tipu said, ‘I welcome the decision of arranging the fair. It will be better if the fair ends before the arrival of the Bengali month of Baishakh. Publishers will face huge loss if the fair gets hit by nor’wester. The academy can introduce online tickets for visitors so that people can visit the fair without standing in long queues. Steps should be taken to prevent gatherings in front of stalls.’

The book fair began on the Bangla Academy premises informally in 1972, and it became institutionalised in 1978. The fair was named Amar Ekushey Granthamela and a guideline for it was formulated in 1984.