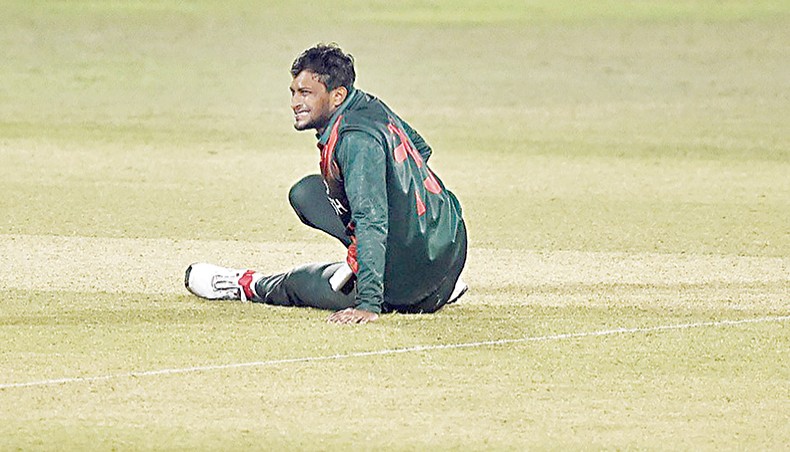 Shakib Al Hasan is unsure about the severity of the groin injury he sustained during the third one-day international against West Indies, which forced him to leave the field immediately and could keep him out of the following Test series.

Shakib left the field limping after suffering a groin injury while bowling his fifth over during their third ODI against West Indies on Monday and is currently under observation, said a BCB official.

Shakib, who came to the presentation ceremony to receive the man of the series prize, said that he will have a better idea about his condition today.

‘At this moment, my groin does not feel all right, but I have to see how I feel tomorrow [Tuesday] morning. At present situation I am feeling that things are not looking good. But nothing can be told before next 24 hours,’ the all-rounder said after the match.

Shakib who made his first appearance for Bangladesh after serving the ICC ban, said that it would have been happier had he played the full match.

‘The way this series went, I am very happy. I would be happier if I could last the entire third ODI, which is the only frustrating part. Overall I am happy with my batting and bowling,’ Shakib said in the post-match media engagement.

The all-rounder, who is expecting his third child in next few months, neither confirmed nor denied the murmur of his unavailability during the upcoming series against New Zealand.

‘I will get a proper idea about this matter after the Test series. Actually these are inside talks; I don’t know how these words come outside. When I sit with the team management for some talks, only then these issues will be sorted out and everything will be clear.’