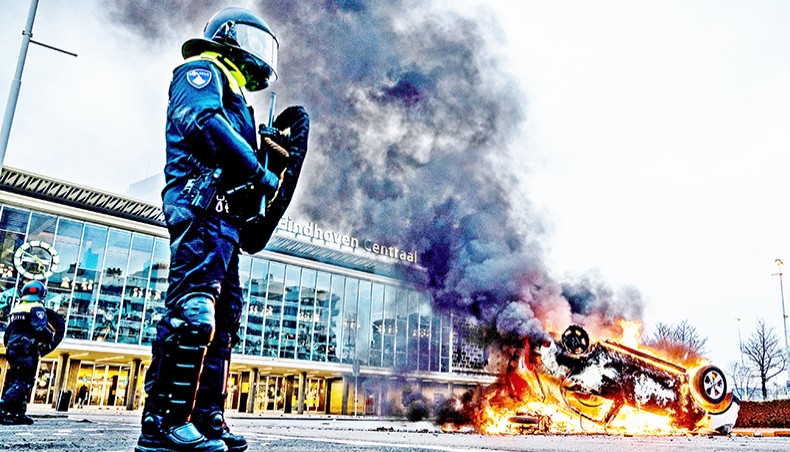 A car has been set on fire in front of the train station, on Saturday in Eindhoven, after a rally by several hundreds of people against the corona policy. — AFP photo

Protests against a curfew to curb the spread of COVID-19 in the Netherlands degenerated into clashes with police and looting in cities across the country Sunday, authorities and reports said.

Police used water cannon and dogs in Amsterdam, public television NOS reported, after hundreds gathered to protest the curfew which is set to last until February 10 and is the country’s first since World War II.

In the southern city of Eindhoven, police fired tear gas to disperse a crowd of several hundred, regional television Omroep Brabant reported. At least 30 people were arrested there, according to police.

A number of vehicles were burned and businesses at Eindhoven’s central train station were also looted, media reports said.

Dutch rail company NS called on travellers to avoid the Eindhoven station, where it said train circulation was interrupted due to the intervention of emergency services nearby.

Eindhoven mayor John Jorritsma told reporters that if the country continued ‘down this path, then I think we are heading for civil war.’

A COVID-19 testing centre was set on fire on Saturday evening in the village of Urk in the north of the country, local authorities said.

‘The fire in a screening centre in Urk goes beyond all limits,’ health minister Hugo de Jonge said on Sunday.

Exemptions are possible, in particular for people returning from funerals or those having to work, but on condition that they present a certificate.

Rutte also announced on Wednesday a ban on flights from Britain, South Africa and South America, and a cut in the number of guests allowed in people’s homes to one, from the previous limit of two.

New variants of the virus have led to deep concern in Europe, particularly a more infectious strain that first emerged in Britain.

The Netherlands was already under its toughest measures since the start of the pandemic, with bars and restaurants having closed in October, and schools and non-essential shops shut since December.

Dutch lawmakers on Thursday approved Rutte’s curfew plan, though on condition that it begin half an hour later than the original 8:30pm start time.

The move had faced criticism led by far-right politician Geert Wilders, who called it ‘careless’ and ‘disproportionate’.

‘I stand here for freedom. I lost it myself,’ said Wilders, who has for years been under round-the-clock security after receiving death threats.

‘I do not accept that we unnecessarily... introduce curfews while there are alternatives.’

Rutte and his cabinet resigned on January 22 over a scandal involving child tax benefits, but they will continue to govern until elections in mid-March.