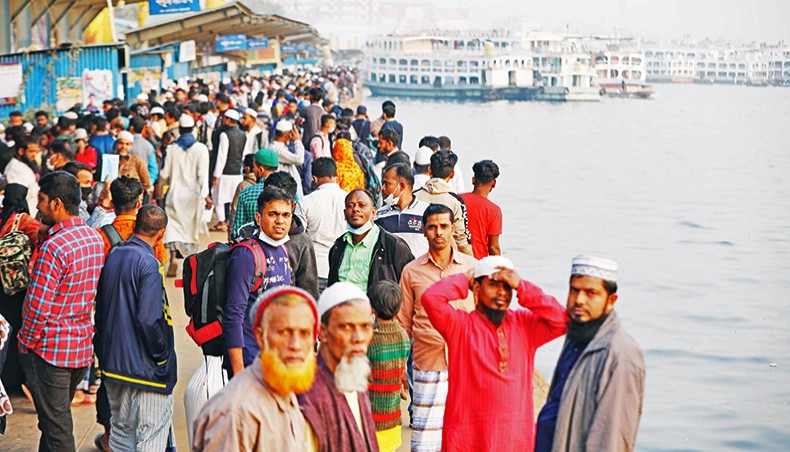 People face severe problem at Sadarghat in Dhaka on Monday for not getting ferries following an unofficial strike of ferry workers in response to a marine court decision to turn down a plea of two launch masters to extend their bails in a case. — Sourav Lasker

Passengers on waterways suffered immensely on Monday following a daylong countrywide wildcat strike protesting at the jailing of two vessel workers in a case.

The workers withdrew the strike on Monday night after getting assurance of assistance from the authorities during the bail appeal for both the workers.

Movement of all passenger vessels came to a halt on the day at the major river ports including Dhaka (Sadarghat), Barishal and Chandpur since noon.

On the day, passengers were seen waiting at the terminals of major cities for several hours while at the capital’s Sadarghat terminal saw some agitated passengers protesting against the strike.

Around 9:00pm, the workers withdrew the strike following a meeting held at Sadarghat terminal between officials of the Bangladesh Inland Water Transport Authority and leaders of Bangladesh Noujan Shramik Federation.

BIWTA chairman commodore Golam Sadeq told New Age that the workers withdrew the strike at the request of the authority with the aim of easing the sufferings of the passengers.

‘We gave assurance that when the two workers would appeal for bail, the BIWTA would assist them,’ he said.

Earlier the federation general secretary Chowdhury Ashiqul Islam said that in 2020, the BIWTA filed a case against two masters Jamal Hossain and Ruhul Amin following a collision between two vessels — Adventure 1 and Adventure 9 — with no causalities.

Earlier on February 15, 2020, the two launches of Nizam Shipping Company collided at Meghnar Miar Char point at Hijla in Barishal district in dense fog around 1:00am.

When they went to the marine court on Monday to fulfil the legal obligation to attend the court, the court cancelled their bail and ordered jail for them, he said.

Ashiqul also said that the workers enforced the sudden and spontaneous strike without any discussion with them.

New Age correspondent in Barishal reported that when the news of jailing of the two workers spread, the workers of seven to eight passenger vessels anchored at Barishal river port suddenly stopped working and demanded bail for their fellows.

All the vessels left the port and anchored at Charkaowa area on the River Kirtankhola under Barishal sadar upazila after 2:00pm.

The sudden work abstention put passengers, including those with advance tickets, in trouble.

They were seen waiting at the river port for hours.

In Dhaka, at Sadarghat launch terminal, since noon, workers started to move the vessels to another location.

Before the evening, some passengers at the terminal began to protest against the strike and demanded interventions by the authorities to ease their sufferings.

Barishal Noujan Shramik Federation president Abul Hashem said that aside from the case, the authorities concerned seized the certificates of four workers, including the two masters for four months in connection with the collision.

BIWTA joint director (ports and traffic) Joynal Abedin told New Age that till 7:00pm on Monday, a total of 37 launches left the Sadarghat launch terminal for Chandpur while 62 launches arrived from different destinations.

‘Usually, at least 84 launches leave Dhaka for different destinations during the day,’ he said, adding, ‘Since Monday evening, no launches left Sadarghat for destinations such as Barishal, Bhola and Jhalakati.’

The launches would start to leave for different destinations from Sadarghat as usual at night, BIWTA officials confirmed after the strike was withdrawn.