Biden seeks to reinforce Trump favoured ‘Made in America’ 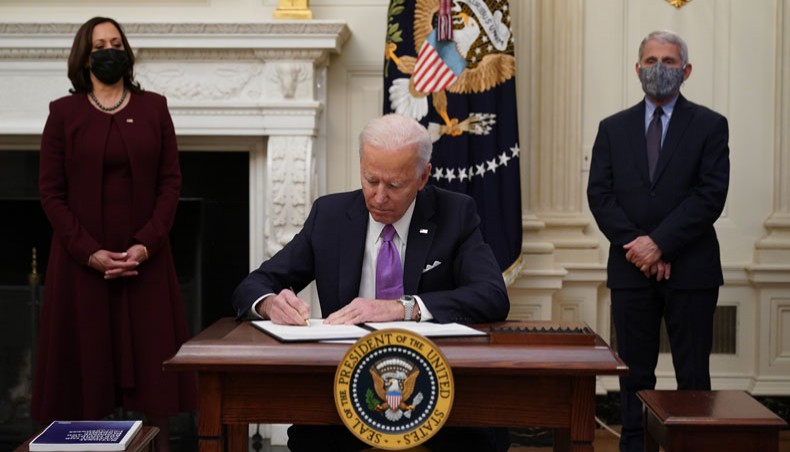 US president Joe Biden signs executive orders in the State Dining Room of the White House in Washington, DC on January 21. — AFP Photo

President Joe Biden will sign an executive order Monday giving priority to US companies and products in contracts with the federal government, pushing a ‘Made in America’ approach favoured by predecessor Donald Trump.

The order, senior White House officials said, aims to boost national production and save industrial jobs by increasing investments in manufacturing industries and workers in order to ‘Build Back Better.’

Less than a week after his inauguration, Biden is pushing his priorities through with executive orders, even though his Cabinet is not fully in place, with the roles such as Secretary of State still to be approved.

Biden wants to limit the way federal agencies stamp the products they buy as ‘Made in America’ in order to eliminate legal loopholes used by companies that often manufacture in the US only a small portion of the products offered to the government.

Biden’s decision echoes those of his predecessors, particularly Trump.

Trump had issued an executive order urging the federal government to purchase more US-made products and turning tariffs into a weapon against imports—with mixed results.

But instead of a trade war, Biden favors tightening the ‘Buy American’ rules and wants to utilize the federal government’s buying power.

‘The dollars the federal government spends... are a powerful tool to support American workers and manufacturers. Contracting alone accounts for nearly $600 billion in federal spending,’ an administration official said.

The Buy American Act of 1933, still in force, requires federal agencies to prioritize buying goods produced on US soil, but ‘these preferences have not always been implemented consistently or effectively,’ according to the Biden administration.

Biden’s approach seeks to change the structure of the process by changing the definition of what is considered a US-made product and reducing the possibilities for exemptions.

The administration also wants new companies, including small ones, to have access to tenders.

During his presidential campaign, Biden promised to strengthen the ‘Buy American’ process with a $400 billion plan for projects using US-made products—including steel, or protective equipment for healthcare workers battling Covid-19.

After his electoral victory, Biden said the federal government would buy American cars and inventory.

However, companies have already warned that overly restrictive rules could cause costs to soar, making it harder to buy parts made outside the US.

The executive order should also be seen as part of ‘the President’s commitment to invest in American manufacturing, including clean energy and critical supply chains,’ an official said.

Washington said the pandemic has highlighted the shortages and weaknesses of the system, and said that it wanted to avoid being put in a position of depending on countries that do not share the US’ interests in delivering essential materials.

Biden ‘remains committed to working with partners and allies to modernize international trade rules... to make sure all countries can use their taxpayer dollars to spur investment in their own countries,’ an official said.