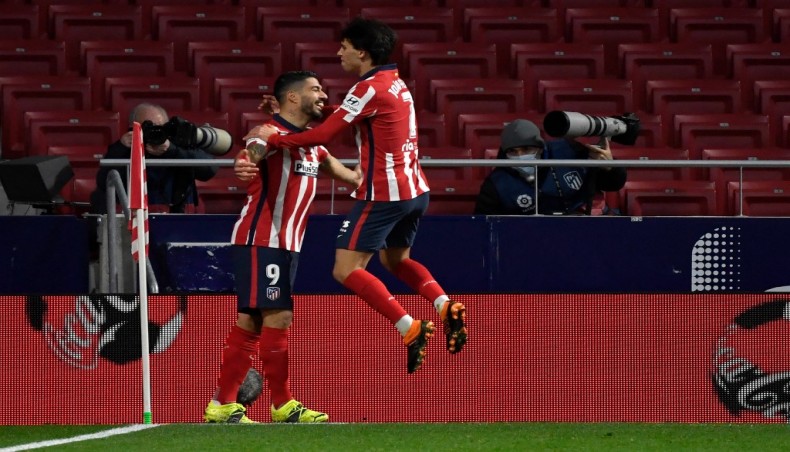 Luis Suarez scored a brilliant team goal as Atletico Madrid came from behind to beat Valencia 3-1 on Sunday and move seven points clear at the top of La Liga.

After Real Madrid thrashed Alaves on Saturday, Barca had earlier followed suit with a scrappy victory over Elche.

But Atletico were undeterred in the capital, as their considerable advantage was restored again, with a game in hand.

‘We don't get carried away or think too far ahead, we think about getting better,’ said Atletico coach Diego Simeone.

Suarez finished off a flowing move that had started almost on Atletico's goal-line before substitute Angel Correa capped another slick string of passes to end Valencia's resistance.

The visitors had taken an early lead in stunning fashion, Uros Racic curling into the top corner from 35 yards but Joao Felix equalised and Atletico came back, in a way that has begun to feel expected.

Felix was replaced by Correa after an hour by Simeone after assisting Suarez and scoring a goal for himself that should send a message to his coach, who has handed the 21-year-old a spell on the bench in recent weeks.

‘It's not written that footballers have to play 90 minutes,’ said Simeone. ‘Joao scored a goal, made an assist, he came off and on came Correa, who scored a goal and was close to another. The competition is healthy.’

Simeone knows the pressure will mount as the La Liga trophy comes more into view, yet his team are showing an assuredness now that is offering little encouragement for Barcelona and Real Madrid.

They had hope when Valencia took the lead on 11 minutes, Racic running onto Jose Gaya's pass and wrapping his left foot around the ball to send it bending into the top right-hand corner.

He celebrated by seeking out his under-pressure coach Javi Gracia, but the advantage was short-lived as Felix stabbed in on the volley at the back post after holding off his marker Thierry Correia from a corner.

With the more attacking Renan Lodi and Yannick Carrasco playing left and right wing-back in the second half, Atletico opened up Valencia twice with two superb, sweeping moves.

The first started in their own right corner with Stefan Savic, the ball played across the back and into midfield where Mario Hermoso drove a searching pass forward to Felix on the left. He slipped in Suarez, who opened his body and finished from the angle.

It was no fluke because the third goal was almost as good, some slick passing through midfield freeing Marcos Llorente down the right and he pulled back for Correa to sidefoot in.
Barcelona won again without the suspended Lionel Messi as goals from Frenkie de Jong and Riqui Puig were enough to secure a scruffy 2-0 win over Elche.

De Jong poked the ball over the line just before half-time at the Martinez Valero, which would have proved a suitably scrappy winner before Puig came off the bench to head in a second late on.

Despite an uninspiring performance, Ronald Koeman will be relieved to see Barca make it two consecutive victories without Messi and since their loss in the Spanish Super Cup final last weekend to Athletic Bilbao, after an extra-time Copa del Rey victory over Cornella in midweek.

Messi is still serving his punishment for being sent off in Seville but the Argentinian will be available again for Wednesday's cup tie at Rayo Vallecano.

In his absence, De Jong stepped up, continuing his own resurgence in recent weeks with one of the simplest goals he will ever score and then an assist, following a more impressive run and cross for Puig.

‘We are better this year. We've had to play all our games away and in La Liga we have won all of them so I think we have done well,’ said De Jong. ‘For me, playing better is not just about goals and assists but I'm happy of course to score and assist today.’