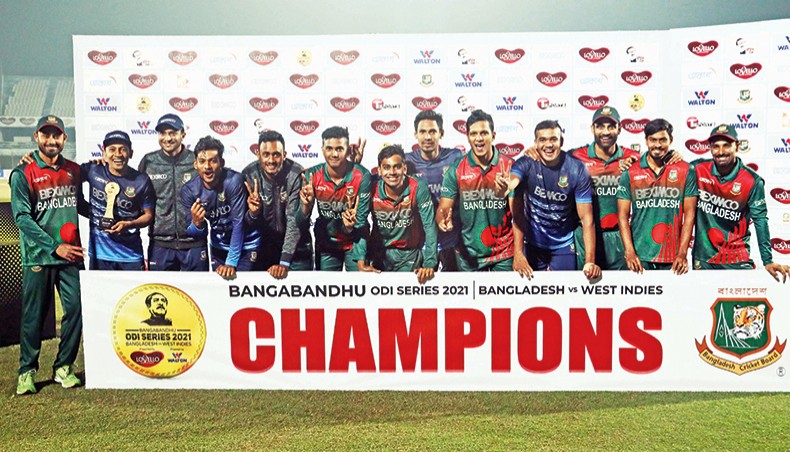 Bangladesh clinched the one-day international series and moved up to second position in the World Cup Super League points table by defeating West Indies by 120 runs in the third and final match at the Zahur Ahmed Chowdhury Stadium in Chattogram on Monday.

The veterans led the way for the hosts as skipper Tamim Iqbal, Shakib Al Hasan, Mushfiqur Rahim and Mahmudullah all scored fifties to help Bangladesh amass 297-6 after being sent in to bat first.

Mohammad Saifuddin claimed three while Mustafizur Rahman and Mehidy Hasan took two each to bundle out West Indies for 177 runs in 44.2 overs and hand Bangladesh its second biggest win over the Caribbean side in ODIs.

West Indies had a shaky start as Mustafiz removed both openers, Kjorn Ottley (one) and Sunil Ambris (13) while Mehidy trapped Kyle Meyers (11) for leg before wicket.

Nkrumah Bonner (31) and Jason Mohammad (17) tried to show some resistance but Saifuddin, who returned to national colours after 10 months, dismissed both to leave the visitors stranded at 93-5 inside 26 overs.

Rovman Powell, who showed some resistance in the second ODI, also stood tall at Chattogram with a counter-attacking 47 off 49 balls but Soumya Sarkar ended his fight in the 41st over to squash any chance of West Indies pulling off a miraculous win.

Tamim, who won his first series as ODI captain, told the media in the presentation ceremony that despite some shortcomings he is very happy with the result.

‘I must say I am 80-85 per cent happy. Today [Monday] one of our top batters should get a hundred, maybe that is one thing badly wanted as a captain. In the first two matches, we should have won by seven or eight wickets as the target were very small,’ Tamim said.

On the other hand, West Indies coach Phill Simmons felt that his charges need to improve on all fronts to become more competitive in the format.

‘We need to improve on everything, in every area, after losing three games. Especially the runs that we put on the board. That’s something we have to work on from now, till our next series which is in March,’ Simmons told the media after the match.

Earlier, the four most experienced players in the Bangladesh side struck fifties in the same ODI for the second time in their careers, the first one coming against Scotland in the 2015 ICC World Cup at Nelson, New Zealand.

Liton Das ended the ODI series with a duck after getting brisk starts in the first two ODIs and Nazmul Hossain, who was promoted up in the batting order, was dismissed leg before wicket for only 20 runs.

Team management’s experiment of sending Soumya Sarkar at number seven also did not work as the left-hander were run out for only seven runs.