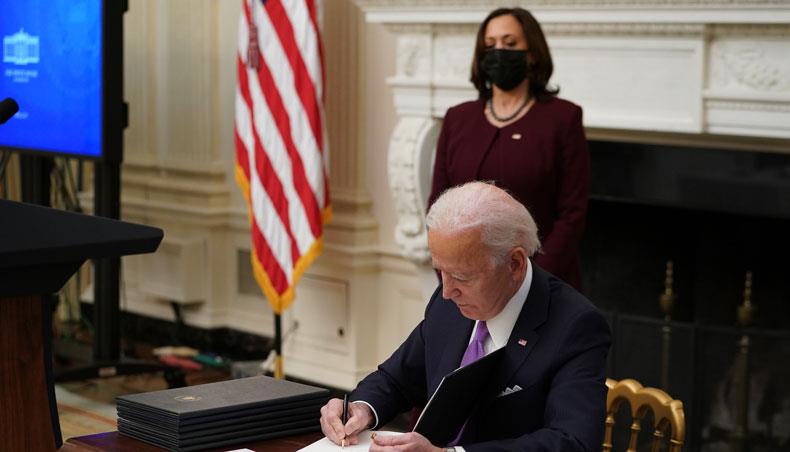 US president Joe Biden signs an executive order promoting safe travel as part of the COVID-19 response in the State Dining Room of the White House in Washington, DC, on January 21, 2021. — AFP photo

President Joe Biden will re-impose a COVID-19 travel ban on most non-US citizens who have been in Britain, Brazil, Ireland and much of Europe, a White House official said on Sunday, as the new administration ramps up its pandemic response.

Biden will also on Monday extend the ban to travellers who have recently been to South Africa amid warnings that new, more transmissible coronavirus variants are already establishing themselves in the United States, the official said, confirming US media reports.

The new president last week tightened mask wearing rules and ordered quarantine for people flying into the United States, as he seeks to tackle the country’s worsening coronavirus crisis.

Biden had said that the COVID-19 death toll would likely rise from 420,000 to half a million next month – and that drastic action was needed.

‘We’re in a national emergency. It’s time we treated it like one,’ he said on Thursday.

In his last days in office, Donald Trump announced that a COVID-19 ban on travellers arriving from much of Europe and Brazil would be lifted – but the Biden administration immediately said it would reverse the order due to come into effect on January 26.

Trump had announced an initial ban on January 31, 2020 on non-American travellers entering from China to try to stop the spread of the coronavirus. The ban was extended to European countries on March 14 as the pandemic entered full force.

More than 25 million COVID-19 cases have been recorded in the US since the pandemic began, according to the Johns Hopkins University tally on Sunday.

The milestone was reached only five days after the US, the world’s wealthiest and hardest-hit nation, recorded 400,000 deaths from the disease.

Biden had made fighting the coronavirus a priority and was pushing for Congress to approve a $1.9-trillion relief package that would include billions of dollars to boost vaccination rates.

The president, who was inaugurated on January 20, had said he wanted 100 million people vaccinated within his first 100 days in office, and he had called for Americans to wear masks for 100 days.