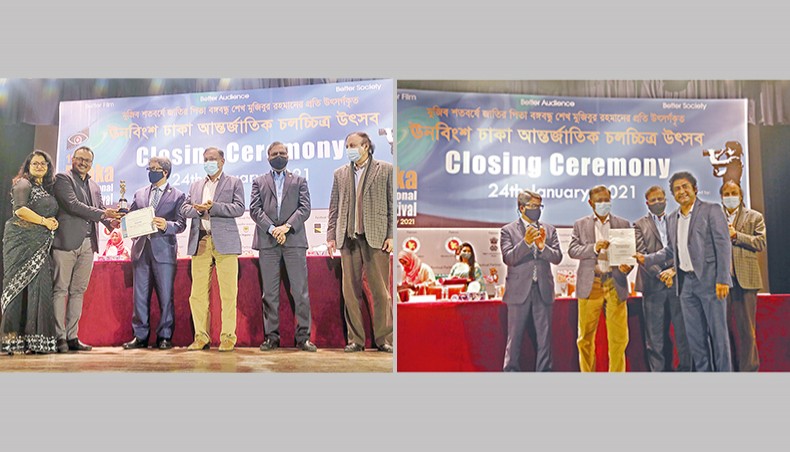 Kyrgyz film The Road to Eden jointly directed by Bakyt Mukul and Dastan Zhapar Uulu won the Best Film Award in the Asian Film Competition segment at the 19th Dhaka International Film Festival which ended on Sunday at the Main Auditorium of Bangladesh National Museum.

Information minister Hasan Mahmud was present as chief guest at the closing ceremony of the festival.

State minister for cultural affairs KM Khalid was present as special guest at the programme which was presided over by state minister for foreign affairs M Shahriar Alam, also the chief patron of the festival.

The festival was dedicated to the country’s founding president Sheikh Mujibur Rahman.

‘The 20th Dhaka International Film Festival will be held from January 15 to January 23, 2022. We are very happy about the audience turnout. It was not so easy to organise this festival in the time of the COVID-19 crisis,’ said Ahmed Muztaba Zamal.

A total of 15 awards were given in different categories at the closing ceremony.

In the Asian Competition segment, the Best Director Award went to director Ksenia Lagutina for the film Farida, an Azerbaijan and Russia joint venture film.

The Best Actress award went to Meruert Subbusinova for Mariam, a Kazakh film, while the Best Actor Award went to Nejat Isler for the Turkish film 9,75. Besides, the Best Cinematography and the Best Script Writer Awards were also given.

Besides, awards in four other segments, namely Bangladesh Panorama Section, Women Filmmakers, Spiritual Films and Children Films were handed over to the winners at the ceremony.

In the Spiritual Film section, a film from Cyprus titled Senior Citizen bagged the Best Feature Award in the Feature Film category. The film is directed by Marinos Kartikkis. An Iran and Norway joint venture film Sunless Shadows directed by Mehrdad Oskouei won the Best Documentary award in the section.

Rainbow Film Society has been organising the festival since 1992, based on the theme ‘Better film, better audience, better society.’

The event also featured ancillary events such as the Seventh Dhaka International Conference on Women in Cinema 2021 on January 17 and January 18, West Meets East on January 19 and others.