Fire at RMG factory in Kamalapur 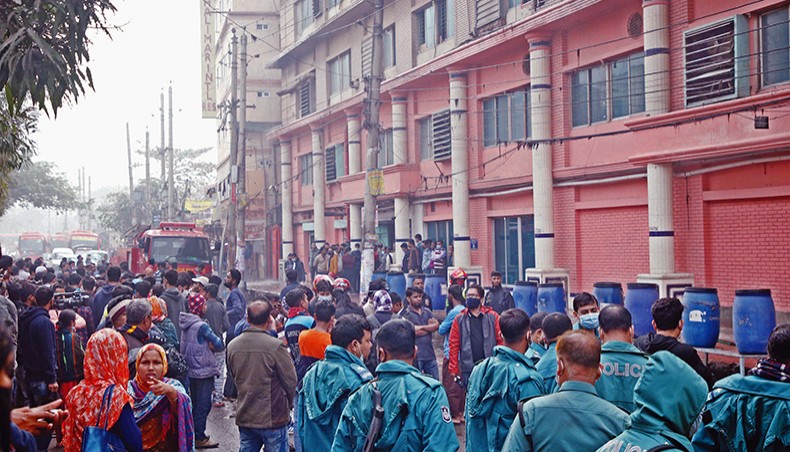 People gather around Oli Garments factory building at Kamalapur in Dhaka on Sunday after a fire broke out on the fifth floor of the building. — New Age photo

A fire broke out at a readymade garment factory near a Bangladesh Road Transport Corporation bus depot at Kamalapur in the capital Sunday morning.

No casualty was reported.

The fire was doused at about 9.00am, said Russel Shikder, duty officer of the fire service headquarters control room.

The fire broke out on the sixth floor of the Oli Garments building in the morning and the factory officials informed the fire service at 7:40am, he said.

At least 10 units of the fire service went to the spot and took one and a half hours to put out the fire, said the officer.

The origin of the fire and damages could not be ascertained immediately, but fire service officials suspected that a short circuit had caused the fire.

A teen-shed structure was built on the roof of the building and the fire broke out from there, said locals.

Some workers said that they arrived at the factory in the morning and noticed that the teen-shed room was ablaze.

They also complained that the fire service took over half an hour to reach the spot and by then, the fire spread into other rooms.

Another fire broke out from a gas line on a road at Uttara Sector 12 on Sunday evening.

Two units of fire-fighters went to the spot, but the blaze was doused by locals in the meantime, said duty officer Russel.

He said that the fire broke out on Shah Makhdum Avenue at about 5.30pm from a gas line leakage.

Parts of the road were damaged, but no casualties were reported.