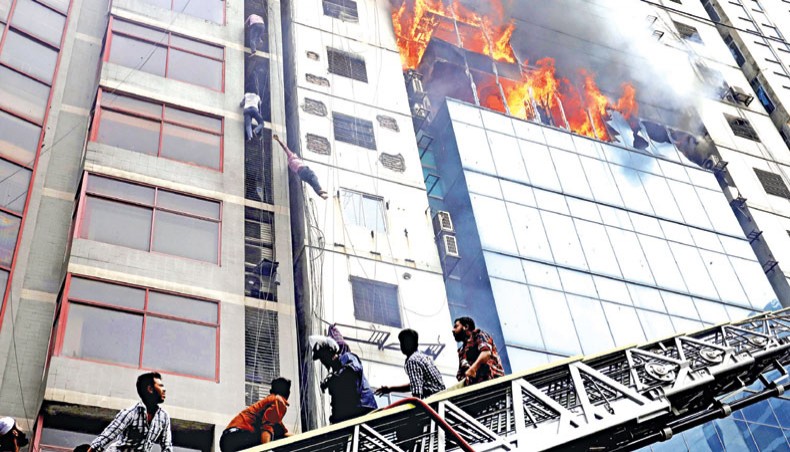 People get out of FR Tower using grilles and utility cables following a fire at the high-rise in Dhaka on March 20, 2019.  — File photo

Some big fishes are out of the trial of the sensational forgery case over the construction of FR Tower additional floors as their names have been dropped from the accused list keeping the names of their subordinates in the Anti-Corruption Commission charge sheet.

The commission investigator has shown some reasons for not including the superiors in the charge sheet, which anti-graft campaigners have described as ‘lame excuses’.

The commission on November 25, 2020 approved the charge sheet against 15 officials of Rajdhani Unnayan Kartripakkha and the three owners of the FR Tower at Banani in the capital in a case filed on charges of corruption in the construction of the five additional floors on the building.

The case was filed on June 26, 2019 accusing 20 people, including the building’s owners and Rajuk’s former chairman KAM Harun and ex-members Rezaul Karim Tarafder and Gulam Kibria.

But the commission has dropped the names of Harun, Rezaul and Kibria and four others from the charge sheet as it has not found their involvement in the corruption, ACC director for public relations Pranab Kumar Bhattachrjee told reporters later.

Besides, a section of ACC officials told New Age that the investigator Abu Bakar Siddique had dropped some names from the accused list as instructed by his superiors.

Later New Age collected a copy of the charge sheet and talked to the investigator about the matter.

Abu Bakar denied the allegation, saying that he has dropped the names form the list as he did not found any involvement of the people in the matter.

He also discussed the matter with his superiors, he said.

Asked why he has dropped the names of some accused from the charge sheet though they too signed the same documents along with other accused, Bakar said that the files had been sent to the then Rajuk chairman’s desk unnecessarily and he signed them in ‘good faith’.

In the charge sheet, submitted to the relevant court, the investigator said that he had not found any ‘mens rea’ — intention of wrongdoing — of former Rajuk chairman Harun in the process.

According to the charge sheet, accused Gulam Kibria was not on duty during the occurrence of the wrongdoing while Rezaul signed the file as suggested by his subordinates in ‘good faith’.

Rezaul, the charge sheet mentioned, showed negligence in supervising his subordinates and hence departmental action could have been taken against him.

But there was no opportunity to take such action against Rezaul as he had already gone on retirement, it mentioned.

The investigator has dropped former building inspector Aurangzeb Siddique from the list, saying that he was the Rajuk CBA president at the time and for the organisational business Aurangzeb failed to perform his official tasks.

In its first information report, the commission had accused them all of their alleged involvement in the approval of the forged design for the construction of the additional floors.

Rajuk’s internal probe committee in June 2019 had also found their involvement in the process.

Former caretaker government adviser M Hafizuddin Khan on Saturday said that the exclusion of accused people from the list demonstrated again that the ACC was always strong against small fries.

Transparency International Bangladesh executive director Iftekharuzzaman on the day said that the commission’s duty was to specify the responsibility of the accused not exonerate them on the basis of so-called ‘good faith’.

Taking different actions against superiors and subordinates for the same offence is a serious violation of the law, they both observed.