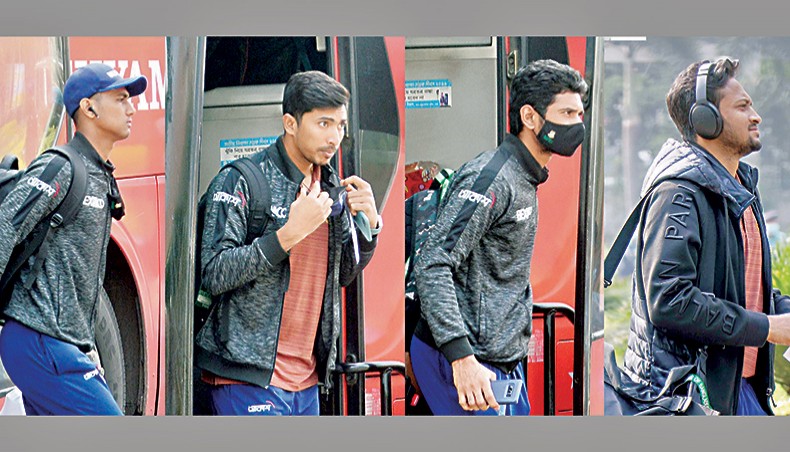 Bangladesh cricketers (from L-R) Hasan Mahmud, Soumya Sarkar, Mahmudullah and Shakib Al Hasan are seen upon the team’s arrival at a hotel in Chattogram on Saturday. — BCB photo

Bangladesh one-day international captain Tamim Iqbal hinted that there will be some changes in the playing XI for the third match against West Indies in Chattogram as the management wants to test few other players with the series already in the bag.

Both Bangladesh and West Indies cricketers reached Chattogram Saturday and will face off in the third and final one-day international of the three-match series on Monday at the Zahur Ahmed Chowdhury Stadium.

Bangladesh won both the first and second ODI matches quite comfortably and after sealing the series Tamim told the media that the management will bring some changes in the team for third and final match.

‘All the guys who haven’t gotten an opportunity to play are capable of doing well. I am sure we will have some changes in the third ODI, and let’s hope whoever comes in does well,’ Tamim told the media.

Though the visitors could hardly challenge the Tigers in the first two ODIs, the host team has shown some areas of vulnerability in their first international assignment in almost 10 months.

Despite having to chase paltry targets in both matches, Bangladesh lost four and three wickets respectively in the first two matches.

Experienced pacer Rubel Hossain failed to take a single wicket in the two matches against an inexperienced batting lineup and was pretty expensive in the first match, conceding 34 runs off his six overs in a low-scoring affair.

Before this series, the last four ODI matches Rubel played were against Australia and India in the 2019 World Cup and two matches against Sri Lanka in a series right after the mega event and in all of those matches his economy rate was over six.

Bangladesh have three fast bowling options in the bench in Mohammad Saifuddin, Taskin Ahmed and Shoriful Islam and Tamim said that they are all eagerly waiting to get a chance in the playing XI.

‘There’s a lot of hunger in the dressing room. Everyone wants to do well. Players like Taskin, Saifuddin have not got a spot in the XI. There’s a healthy competition going on,’ Tamim said on Saturday.

However, Bangladesh Cricket Board president Nazmul Hasan expressed his concern about making too many changes in the XI.

‘There may be changes in the XI, but we don’t want to underestimate anyone. Please remember that this is the start of our ICC Super League. We already got 20 points. Every match is very important, so we can’t take anything for granted.

‘We want to qualify to the World Cup directly, so we are taking every game seriously,’ Nazmul told the reporters on Saturday.