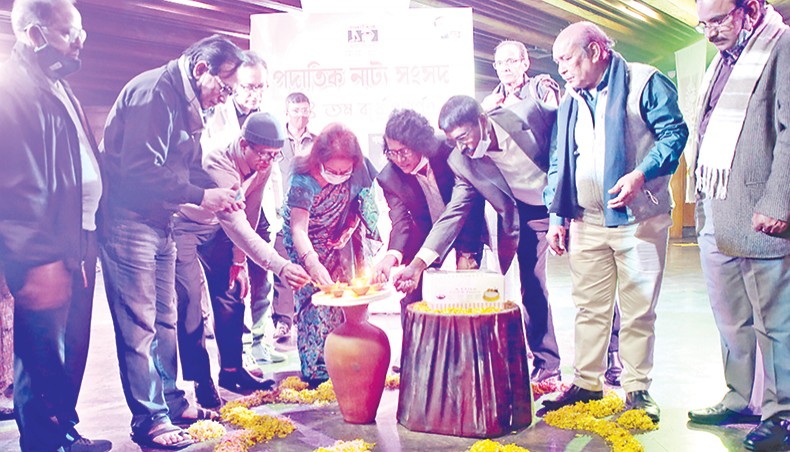 The programme featured discussion and shows of its plays Gahanjatra and Macbeth.

Guests and organisers commenced the programme lighting candles. They also cut a cake at the event.

Following which, a short discussion was held at the venue.

‘It is not easy to practice theatre in Bangladesh. I congratulate Padatik for successfully completing 43 years. Besides, I want to thank theatre lovers for supporting the troupe. I wish Padatik all the best in its future endeavours,’ said Lucky Enam.

‘Padatik has been playing an important role in popularising theatre practices in the country. It has produced many theatre activists who are representing our country across the globe. Bangladesh Group Theatre Federation will continue to stand beside the troupe,’ said Kamal Bayazid.

‘Padatik was founded by a group of leading theatre activists of the country. The troupe has produced a number of acclaimed plays including Maxim Gorky’s Maa. It has also produced popular street plays. I congratulate Padatik for successfully completing 43 years,’ said Ahmed Gias.

Following the discussion, the troupe staged Gahanjatra and Macbeth.

Gahanjatra has been written by Rubayet Ahmed and directed by Sudip Chakraborty. It is the 39th production of the troupe.

Macbeth, based on William Shakespeare’s tragedy in the same title, has been translated by the late eminent poet-playwright Syed Shamsul Haq and directed by Sudip Chakraborty. The troupe staged the 50th show Macbeth at the event.

Padatik Natya Sangsad TSC began its journey on January 21, 1978. The troupe premiered 26 plays and has 17 street plays till date.