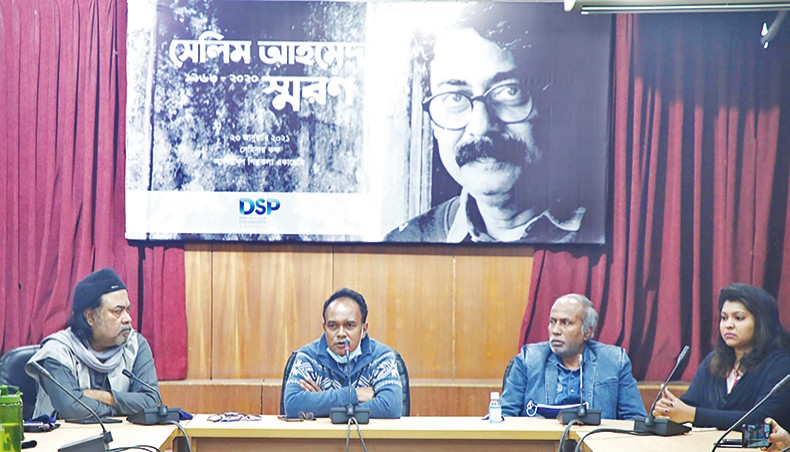 Actor, art director and book cover designer Selim Ahmed was remembered at a programme held at the Seminar Room of Bangladesh Shilpakala Academy on Saturday.

Guests and organisers observed one minute silence in memory of Selim Ahmed, who passed away on December 23, 2020.

‘Selim Ahmed was a multitalented person. He could easily befriend anyone. He had designed 23 covers of books by Professor Muhammad Yunus. He was the chief designer of Aarong and designed its logo. He also worked for the welfare of rural artisans,’ said Shahidul Alam Sachchu.

‘I had a great relationship with him. I first met with him in 2013. He made outstanding contribution to digital cinema making, colour grading in films and editing. He was an adventurer, entrepreneur and motivator. The country’s younger generations should follow in his footsteps,’ said Golam Rabbani Biplob.

‘I had known Selim bhai since 1982. He actively participated in the anti-Earshad movement. He was a jolly and kind hearted person. He never misbehaved with anyone. We would try to promote his works among the young generations. May his departed soul rest in peace,’ said Khandakor Saiful Islam Nipu.

Selim Ahmed was born in 1963 in Rangpur. He studied at the then fine art institute, now Faculty of Fine Arts, of Dhaka University. He began his career as a book cover artist.

In the early 1980s, when a number of young artists in Chattogram and Dhaka together launched a group titled Somoy, Selim also became a member and remained with the group for about one year.

His acting career was launched with the play Jayita. He also acted in the drama series titled Lotakambal and others.