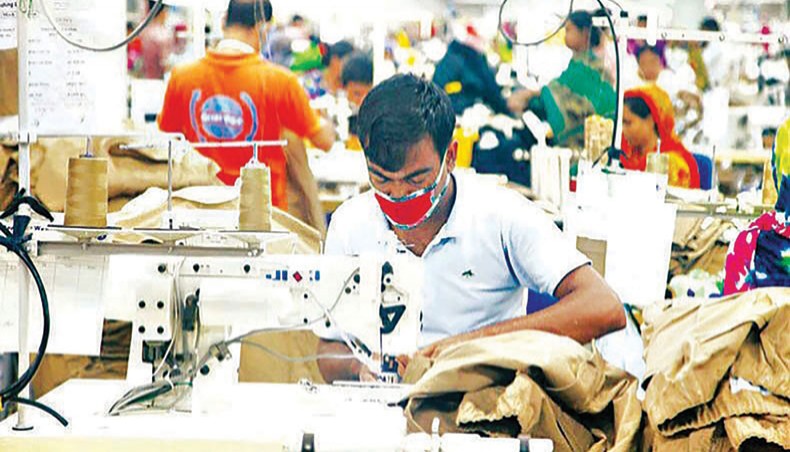 A file photo shows a worker sewing clothes at a garment factory on the outskirts of Dhaka. The majority of readymade garment factories in Bangladesh did not follow the labour laws and rules in laying-off and terminating workers amid the coronavirus outbreak, according to a study. — New Age photo

The majority of readymade garment factories in Bangladesh did not follow the labour laws and rules in laying-off and terminating workers amid the coronavirus outbreak, according to a study.

The study titled ‘Vulnerability, Resilience and Recovery in the RMG Sector in View of COVID Pandemic: Findings from the Enterprise Survey’ found that only 3.6 per cent of factories complied with the compensation principle while 70 per cent paid wages, only excluding other lawful benefits, to the retrenched workers.

The study jointly conducted by the Centre for Policy Dialogue and Mapped in Bangladesh found that a total of 3.57 lakh garment workers lost their jobs between December 2019 and September 2020 amid the COVID-19 outbreak.

The study showed that about 59.5 per cent of factories also recruited new workers during the outbreak and the recruitment rate was high at factories in Dhaka and Gazipur.

It showed that as many as 37 per cent factories both retrenched and recruited workers amid the COVID-19 outbreak.

‘It is alleged that factories which recruited new workers have largely recruited their retrenched workers but at downgraded levels (e.g. lower grades, lower pay, regular basis, contractual basis etc.). Though workers got the jobs through this new recruitment, but they lost entitled benefits due to discontinuation of their jobs,’ the report said.

The CPD study identified that the financial management of RMG enterprises was very poor and the majority of factories, including those of large enterprises, failed to cope with the immediate crisis due to lack of planning.

According to the report, the months of April and May of 2020 were the most troubled months for the country’s RMG factories but their capacity utilisation rate improved over time with the rise in orders.

Regarding the order situation between November 2020 and April 2021, 44 per cent factories claimed they were certain of their orders, it said.

The remaining 56 per cent reported different levels of uncertainty while 11 per cent of them indicated high uncertainty with regard to orders for the next six months, the study said.

The study identified that the virus outbreak created opportunities for new business and about 12 per cent factories received new types of  orders, including those for face masks and personal protective equipment.

Such new product orders partly helped factories to maintain their business operation amid the outbreak and non-member factories partly survived by supplying these new products, the survey found.

If any factory owner has retrenched workers in violation of the laws, the trade body will take the necessary measures to realise the lawful benefits of the workers, he said.

Hatem also said that the workers were being recruited back in most of the factories as export orders had increased in recent months.

He, however, said that the majority of the factory owners were running their units at losses of 10 to 20 per cent and the government should increase the repayment tenure of the stimulus package declared for the factories.

‘Risks are absorbed by the supplying country and suppliers while buyers and brands are largely risk free. The health of the workers is a big challenge for the industry,’ said CPD chairman Rehman Sobhan.

He recommended a social insurance scheme with contributions from the government, manufacturers, buyers and workers as well as donors.

Primarily, it would be for unscheduled unemployment, Rehman said.

Bangladesh Garment Workers’ Solidarity coordinator Taslima Akhter suggested that further research on the effects of the COVID-19 outbreak on workers’ health should be undertaken in the interest of their future productivity and earnings.

She also urged for setting up an emergency fund for the workers during such crises.

Former IndustriALL Bangladesh Council secretary general Kutubuddin Ahmed alleged that many pregnant female workers were retrenched amid the COVID-19 outbreak without any benefits.

He recommended that workers’ wellbeing should be ensured to increase their productivity through measures that may include vaccination, health services, a rationing system and social security benefits.

CPD executive director Fahmida Khatun said that the survey used the database of Mapped in Bangladesh and collected information from 610 RMG factories.

The aim of the study was to address the resilience and vulnerability of the RMG sector based on the information, she said.