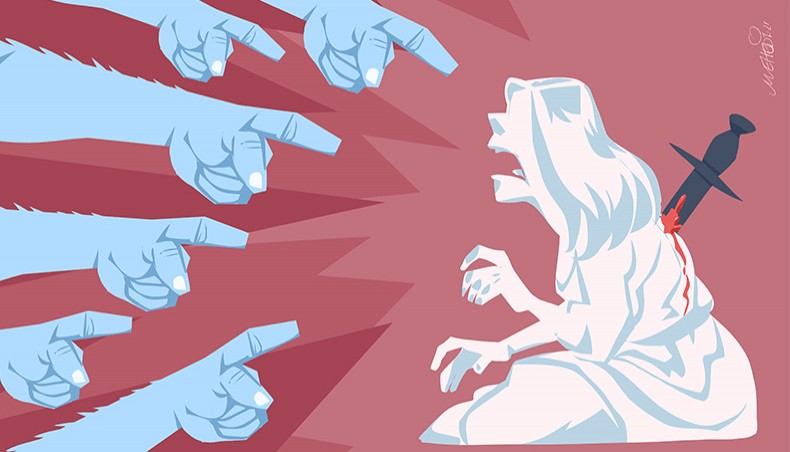 Everytime there is a rape, no matte what, the social tendency to blame the victim dominates the public conversation. The recent rape and murder of a O level student in the capital was no exception.  In this context, feminist organisations have demanded introduction of sex education in high school curriculum. While social change is a long term process, introduction of sex education could be a stepping stone towards that goal, writes Nahid Riyasad

The recent rape and murder of a student at capital’s Kalabagan area flared up protests both on the streets and social media platforms. Many netizens asked for strict measures to curb gender-based crimes and the introduction of sex education. Meanwhile, many people in different social media platforms blamed the victim and vehemently insisted that the victim was also at fault. A casual visit to any public social media post about the incident would reveal several misogynistic and male chauvinistic comments holding the victim accountable for her rape and murder.

Victim blaming occurs when the victim of a crime is held entirely or partially at fault for the harm that befell them. In 1971, psychologist William Ryan coined the term ‘blaming the victim’ in a book with the same title. In the book, Ryan described victim blaming as an ideology used to justify racism and social injustice against black people in the United States.

Victim blaming is nothing new rather it is etched in the literature and cultural consciousness that constructed our modern time. The practice of shifting the blame of a wrong action on the victim is also known as Medusa syndrome. Greek poet Hesiod, in a poem written in the 8th century BCE, described how Medusa, a devotee of goddess Athena and a rape-victim was further condemned by Athena. To humiliate Athena, the sea god Poseidon violated Medusa at Athena’s temple-shrine. Instead of punishing Poseidon, Athena blamed and cursed the Medusa and turned her into a horrible snake-hair monster. These works of literature have been constructing collective psyche of a misogynistic-patriarchal status hierarchy and symptoms of such culture are still evident in real-world and social media.

In the context of sexual violence in Banladesh, comments such as ‘the girl were in a relationship with the boy’ or ‘why did she went to that boy’s empty house’ could be observed in social media platforms. Similar reactions from conservative quarters also surfaced on the internet after the rape in MC College Sylhet in September 2020. Social commentary aimed at the victim’s clothing or people asking them ‘what were they doing there after dark’ incited a public debated. Such a tendency to blame the victim or try to neat-peak her faults instead of the perpetrator’s wrongdoing is revealing the collective psyche. The sheer number of such comments is a sign that the issues need to be addressed immediately.

The social tendency to blame the victim and the male entitlement revealed in the multi-country study said so much about the rape culture that persist in Bangladesh and that a man can force him upon any woman and the society has given him not only impunity but also will collectively blame the victim for the violence she endured. Taqbir Huda is a young socio-legal researcher with a particular interest in gender justice. During an interview with the New Age Youth, he said a two-fold change is crucial to address victim-blaming — legal and social.

‘There should be a complete ban on the admissibility of character evidence in rape trials. This would require Section 155(4) of the Evidence Act 1872 to be repealed, which allows defence lawyers to adduce evidence in rape cases to prove that the woman was of ‘a generally immoral character’ and leads to their asking degrading questions to the rape survivor during cross-examination,’ Raqbir said.

However, he believes that legal reforms can do little to change the collective thinking process of society. For that to happen, sex-education needs to be introduced at the secondary level of schooling. ‘We must constructively call out anyone who has the obnoxious tendency to blame a victim rather than the rapist and explain to them why it is inherently unjust so that they will think twice before spouting such utter nonsense,’ he said.

Shireen Huq and Syeda Samara Mortada key organisers of the recently formed platform ‘Feminists across Generations’ in a recently published article underscored the importance of the introduction of sex education in the school curriculum. They said, ‘Comprehensive sex education, including a clear understanding of consent, must be made mandatory in all schools’ (The Gurdian, October 19, 2020). They also talked about the significance of amending legal framework to prevent the institutional scope of victim-blaming. ‘Systemic change is necessary and the modernisation of Bangladesh’s antiquated laws, such as the Character Evidence Law, which allows survivors to be questioned in the court of law on their character’, Huq and Mortada added.

During a conversation with New Age Youth, Ahona Hassan a lawyer and an activist of the platform said, ‘Schools play an important role in shaping a human being. As sex is a social taboo, teachers are not comfortable teaching such matters. Also what we get in the name of sex education in the school curriculum is anything but comprehensive. As a result, young people are growing up without the knowledge of consent in relationships.’

To undo the social tendency and make ordinary people understand the conseuqnce of their utterances, Feminist Across Generations have made a 10-point demand that include rape law reform, social transformation through robust sex education and insist on breaking the taboo on sexuality that exists in our society. The government must consider incorporating gender equality and lessons of sexuality in primary and secondary education to help students acquire a healthy understanding of sexuality and awareness of the legal consequences of sexual violence.