American politics and foreign strategies: effulgence of the dark side of democracy? 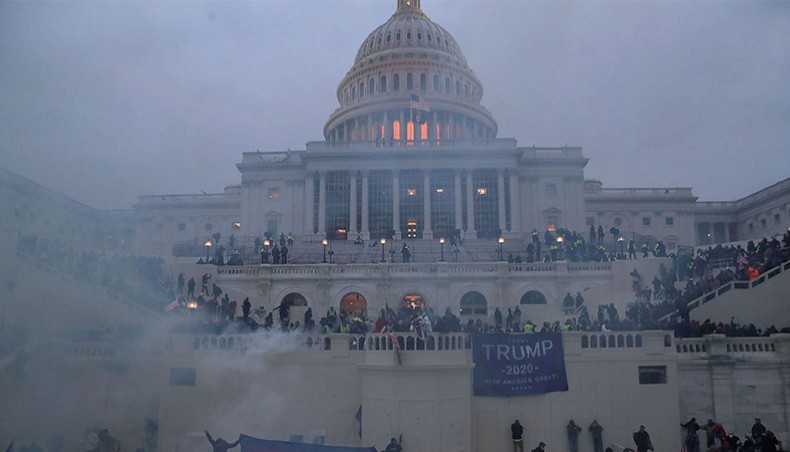 The United States account for 79 per cent weapon trade in the world resulting in a USD 143 billion industry on an average per year. The United States exported four times more arms around the globe than the next nine countries combined. So, the USA needs to cultivate wars and conflicts inside a country and across the globe. Otherwise, their trillion dollars arms-based economy will collapse, writes Md Talebur Islam Rupom

Recently, the storming of the United States Capitol has pointed out of the American politics which can be referred to as the effulgence or dark side of democracy. Every coin has two sides; so does democracy.

Simultaneously, American influence or complete invasion of foreign countries in the name of establishing democracy is a focus point of the article. It also talks about their global strategies with their arms business based economy and foreign policies. Do other countries take the lessons from similar strategies when the US-led west creates the demand for democracy according to their necessity — especially by selling arms and exploiting national resources of other countries?

Rather, when a country goes smoothly, then the US-led west often creates the demand for democracy and persuades foreign people on their boat. After that, weapons are supplied to all the parties within a country or a region by the participating countries.

Joe Biden won a decisive victory in the US presidential election of 2020. The size of the Democrat’s winning margin did a lot to calm immediate fears for the future of American democracy. It was depressingly predictable that Donald Trump would seek to overturn the result, by any means available.

But in the two months since the vote, US institutions have demonstrated their robustness. Courts at every level have rejected Trump’s meritless efforts to overturn the election. Public officials — many of them members of Trump’s Republican Party — have done their jobs, supporting democracy and the rule of law. So far so good. But American democracy is not safe yet.

As an angry mob stormed the heart of the world’s most powerful democracy on January 6, 2021, the rest of the world watched the once-unimaginable scenes unfolding at Washington with dismay and disbelief — and deep concern about what the turmoil could mean as authoritarian forces gain strength around the globe.

Many of those following live broadcasts of armed rioters forcing their way into the Capitol saw it as a stark and disturbing warning for all the world’s democracies: if this can happen in the United States, it can happen anywhere.

Perhaps, this is also the beauty of democracy where anybody can go to the parliament inside and can speak anything. Not many countries have democracy constitutionally, officially or even practically. Several socialist or communist or monarchy constituted countries such as China, Thailand, Vietnam, Cambodia et cetera see the absence of democracy and any kind of democratic practice. Besides, many other nations have governments sited through the so-called democratic process but, freedom of speech, transparency and other major democratic components are absent.

So, the rest of the world can reflect them through the USA that has one of the strongest and the biggest democracy in the globe. Being allowed to practice democracy is a phenomenon. When such a democratic and a top developed nation misuses the term and forces other nations to kneel strategically, perhaps this is the largest loss of democracy too. How does it happen?

Let me tell you and bring one more example and its anagnorisis. Countries in the Middle East has been always experienced the missing of proper democracy. Despite this absence, this oil-rich region saw the Arab Spring which looked great at first glance. Later on, it is being proved as the catastrophe of their freedom of speech and other basic rights to date. Many times, it is apparent as a democratic system but the truth is quite complex.

We can take Yemen as an example which is now facing the worst humanitarian crisis in the world since the past several years. Saudi Arabia is reportedly the cause of this crisis where the USA keeps its support on them and that’s too in the name of democracy. So, if other victimised countries start motion against the USA on the name of democracy, how will the USA take it? So, to think it deeply, I prefer to look into surrounding issues for such strategies and focus on their arms business and its foreign policies.

The world spends nearly USD 3 trillion a year on arms and the United States drives the bulk of the globe’s weapons trade — about 79 per cent, according to figures compiled by the US State Department. The report found that the United States accounted for an average of USD 143 billion annually in weapon deals. The European Union was responsible for about 10 per cent, followed by Russia at 5 per cent and China at less than 2 per cent. The United States exported four times more arms around the globe than the next nine countries combined.

Despite declining in 2013 from a peak of USD 206 billion, the global annual value of international arms transfers from 2007 to 2017 rose about 65 per cent from about USD 119 billion to nearly USD 195 billion, according to the State Department’s Bureau of Arms Control, Verification and Compliance, which compiled the report. So, the USA needs to cultivate wars and conflicts inside a country and across the globe. Otherwise, their trillion dollars arms-based economy will be collapsed.

Hence, the attack of the capitol reminds the American lawmakers to use democracy properly not only inside the USA but also around the world. Since democracy is connected to people, so people are capable of establishing their rights whatsoever they think as their rights. So, it is essential to practice all the elements of democracy and illuminate people properly. Otherwise, it can flame within.

Eventually, it impacts on the stability of a country both from the perspective of economic and human rights in and outside of the country.