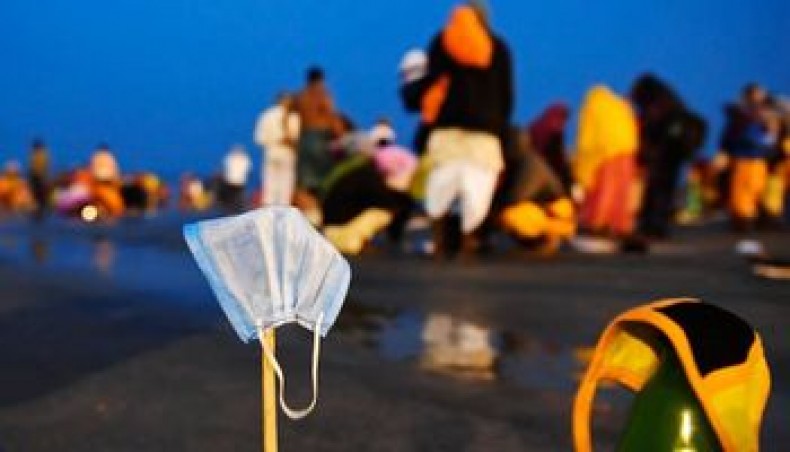 Facemasks of Hindu pilgrims kept for drying are pictured at the confluence of Ganges and the Bay of Bengal during the Gangasagar Mela on the occasion of Makar Sankranti, a day considered to be of great religious significance in Hindu mythology, at Sagar Island, around 150 kms south of Kolkata on January 14, 2021. — AFP photo

The World Health Organisation said on Friday that it had no plans to change its guidance recommending fabric facemasks as new coronavirus variants spread, because the mutated strains are transmitted in the same way.

Germany and Austria have made medical masks mandatory on public transport and in shops — allowing only surgical or FFP2 masks, rather than fabric — amid concerns over the threat posed by the rapidly-spreading new virus mutations.

Maria Van Kerkhove, the WHO’s COVID-19 technical lead, said that some of the new variants ‘may have increased transmissibility’, but that from studies in Britain and South Africa of the mutations detected there, ‘we have no indication that the modes of transmission has changed. It spreads the same way’.

The WHO advises that ‘non-medical, fabric masks can be used by the general public under the age of 60 and who do not have underlying health conditions’.

Meanwhile it recommends medical masks for health workers in clinical settings, anyone feeling unwell, awaiting COVID-19 test results or having positive, and people caring for a suspected or confirmed case.

They are also recommended for people aged 60 or over, or with underlying conditions, due to their higher risk of serious illness.

Van Kerkhove told a press conference in Geneva that the UN health agency does not plan to shift its position.

‘Countries are free to make decisions as they see fit,’ she said.

‘We will continue to look at the evidence that we have seen, but from the data that we have seen from the countries that have these virus variants, there is no change in the modes of transmission. If anything changes, we will modify and we will update accordingly,’ she added.

She said that fabric facemasks should be made of three layers to provide adequate protection.

But such facemasks are only one tool in reducing the spread of the virus, and no one solution alone would get the pandemic under control, Van Kerkhove said.

As for medical masks, required by health workers, she said that global shortages remained a concern.

‘The shortage issue has improved over time, but it is still not completely fixed,’ she said.