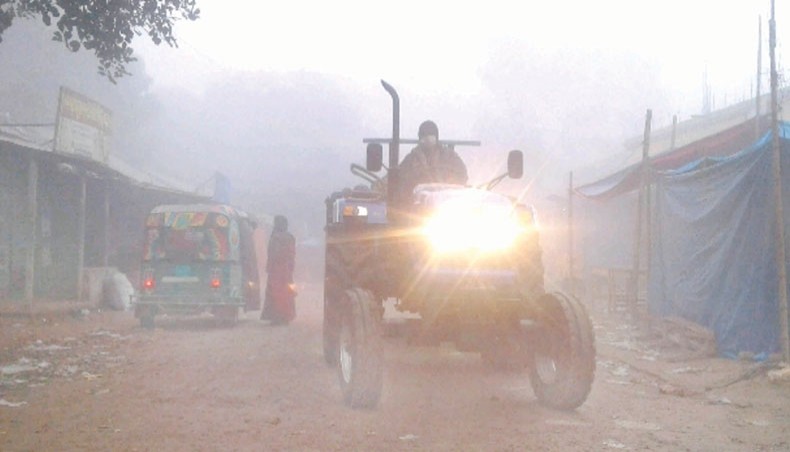 A farmer drives a tractor on a road at Dhunat in Bogura braving a dense fog in the morning amid a low visibility on Friday. — Focus Bangla photo

Dense fog continued to cause sufferings to travellers, forcing authorities to repeatedly shut down the airport, suspend ferry services and the operation of vehicles on the Bangabandhu Bridge several times since early Friday.

People took to Facebook to share their sufferings while stuck in buses at Paturia ghat as the ferry service over the River Padma remained suspended for nine hours since the early hours of Friday.

Thousands of travellers, including children and elderly people, remained stuck in vehicles for hours at major river crossings and the bridge linking the capital with northern and southern districts.

This is just great! I have spent 17 hours travelling from Khulna to Jahangirnagar university, Rakib Hasan, an FB user, posted around 4:00pm.

In normal conditions it may take about seven hours to travel from Khulna to Savar, where the Jahangirnagar University is situated.

The ferry service over the Padma between the Paturia and Daulatdia terminals remained suspended from 2:30am, leaving hundreds of vehicles stranded on either side of the river.

New Age correspondent in Munshiganj reported that the ferry service over the Padma between Shimulia and Bangla Bazar had remained suspended until 7:00am on Monday for four hours.

New Age correspondent in Tangail reported that the Bangabandhu Bridge authority stopped movement of vehicles over the bridge several times after 9:00pm on Thursday.

Elenga police outpost in-charge Kamal Hossain said that the traffic congestion that resulted from the disruption caused by the dense fog stretched for 20 kilometres at one point on the side of Tangail.

The construction work ongoing at parts of the highway linking the northern districts to the capital Dhaka through the Bangabandhu Bridge across the River Jamuna increased people’s suffering.

The movement of vehicles over the highway normalised around Friday noon.

The air traffic control office at Hazrat Shahjalal International Airport confirmed the diversion of three international flights from the airport to Chattogram due to poor visibility after 2:00am.

The air traffic office said that the operation of flights went on and off depending on the visibility and went back to normal by noon.

The Met Office said that temperature began dropping across the country, especially in the northern region where the country’s lowest minimum temperature of 9.6C in the last 24 hours until 6:00am Friday was recorded in Tetulia.

It is considered a cold wave when temperature falls below the 10C mark.

‘The stage has been set for a mild cold wave to spread over the north,’ said meteorologist Bazlur Rashid.

The cold wave is likely to stay for two to three days, he said.

Bangladesh Meteorological Department said that night and day temperature may remain unchanged until Saturday morning but moderate to thick fog may occur over the river basins.

The country’s highest temperature in the last 24 hours until 6:00am on Friday was recorded in Feni.