Navalny in Moscow and the empire intones 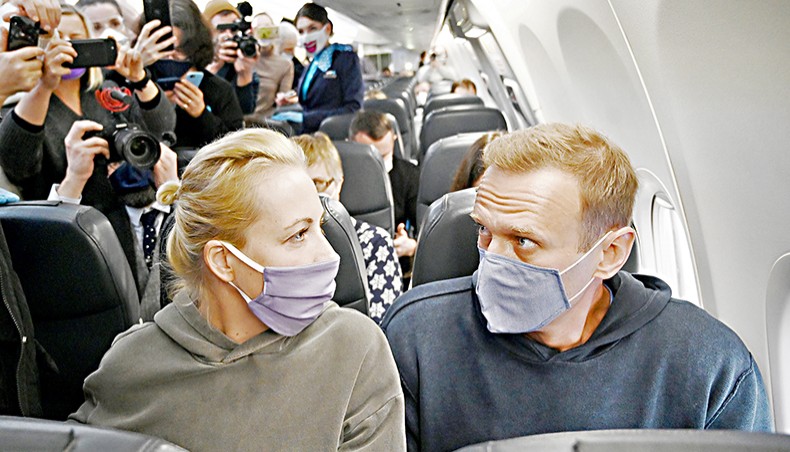 The old tone is now set again. There is Navalny, a Russian opposition politician the empire finds useful and there is concern by Jake Sullivan, the National Security adviser of the US president Joe Biden.

Alexey Navalny was detained in a Moscow airport on his return from Germany on January 17, 2021. Sullivan demanded that Russia should immediately release Navalny. It is that old tone of interference that tells others about duties and responsibilities for upholding ‘democracy’ and interest of the empire.

This tone will be used and re-used increasingly in the coming days. This tone will be used in cases of other countries, be it Myanmar or China, India or Bangladesh, Venezuela or Cuba. Wherever the empire will find its interest, and the empire’s interest is spread all over the earth, the cacophony will be repeated with varying degrees, pitch and form, beginning from ‘expressing concern’ and ‘calls for democracy’ to the infamous R2P and the no-fly zone tact. It may be the South China Sea or Rohingyas in a Bangladesh island or the procurement of the Russian missile system by India. Issues for interference will always be there for the empire and the neocons have gathered there. Therefore, tension, like the old cold war days, will rise in regions.

After spending months in Germany, Navalny returned to Moscow. He went to Germany to have medical treatment of a case of ‘poisoning’ as he collapsed while on a domestic flight on way to Moscow. Initially, he was treated in a Russian hospital and was then flown to Germany. The Russian political activist, German doctors claimed, was poisoned with a nerve agent called Novichok.

The Russian doctors who treated the political activist found no trace of the toxic agent in the activist’s system. A toxicologist claimed that others travelling with the activist would have suffered if the activist had been poisoned with the military-grade nerve agent. Germany ignored Russia’s repeated calls for Berlin to provide Moscow with Navalny’s medical data. Russia also called for a joint investigation of the incident. That was ignored also. Nevertheless, the case, beginning around August 2020, of poisoning persisted with those interested to play with.

Navalny is facing charge: the breaching of terms of his probation and that was also from an earlier criminal allegation. So, he was wanted in Russia. In Moscow, he has been remanded.

Whatever is the case of Navalny is to be sorted out by the authority concerned and the Russian political figure fighting corruption. But the case is the concern, etc of the empire. It is part of intervention in other countries.

However, it is difficult for the empire to survive without intervention in other land. Its economy demands intervention. That is a problem that always accompanies the empire. But these days, on the one hand, are not those Saddam-Iraq or Gaddafi-Libya days. Some changes are there in the world theatre of geopolitics. The change is difficult to handle by the empire. Therefore, it will not be like putting a hot knife on a piece of butter as was done in Libya during Gaddafi’s last days.

Now, there are voices from Moscow and Beijing. Only days ago, Beijing reminded Washington of George Floyd’s choked voice telling difficulty in breathing. Beijing was responding to Washington’s concern with a certain region in China.

Sanctions regime, a tool of the empire, is used to threat, coerce and compel any ‘disobedient’ or ‘going-to-be-disobedient’ state. However, that sole authority to use the tool is going to go away. China’s foreign ministry said on January 18: US officials who have engaged in ‘nasty behaviour’ over Chinese-claimed Taiwan will face sanctions. China’s cautionary note came after the US had lifted curbs on exchanges between US and Taiwanese officials.

Similarly, on the Navalny case, the spokesperson of the country’s foreign ministry, wrote in response to Jake Sullivan’s demand: ‘Foreign politicians should focus on domestic issues at hand, and respect the Russian law.’ A biting truth — domestic issues at hand — has been mentioned. The fact is so much bitter that it is difficult to swallow for the party concerned.

The Russian spokesperson told the plain truth as she cautioned all interfering into internal affairs of Russia as she wrote in a Facebook post: ‘Have respect for international law, do not interfere with the national law of sovereign countries and deal with your own domestic problems.’ These demand and response happened in mid-January.

The present tone is different from the tone of those Gorbachev days. Those were tones in submission.

Years ago, the empire was the sole standard-bearer of ‘rights’ and ‘democracy’, a guardian-like figure. However, that day is now lost. Already it has lost image — that cloak has flown away with the air of exposure at home and abroad. Moreover, other geopolitical players have emerged; and they have clouts. Since the 1990, one of the watershed moments in the world history, the empire has not faced such a competition and such a complex competition.

On the other hand, the empire is having problem at home. It is much serious. It appears in its society, its economy, and its politics now ridden with belligerency. These are devouring the empire. The empire, very learned and intelligent, cannot ignore this fact of its life.

The single case of the pandemic, if all other fundamental cases are set aside, in the empire tells a lot about the condition of the state machine. ‘For nearly the entire pandemic’, writes the New York Times, ‘political polarization and a rejection of science have stymied the United States’ ability to control the coronavirus. [….] [G]overnors and local officials who were left in charge of the crisis […] as they sidelined health experts, ignored warnings from their own advisers and, in some cases, stocked their advisory committees with more business representatives than doctors. [….] [T]he full extent of the nation’s failures has come into clear view: The country is hurtling toward 400,000 total deaths, and cases, hospitalizations and deaths have reached record highs, as the nation endures its darkest chapter of the pandemic yet.’ (‘One Year, 400,000 Coronavirus Deaths: How the US Guaranteed Its Own Failure’, January 18, 2021)

‘[T]he threat of violence from his [Joe Biden’s] predecessor’s supporters.’

‘[A] nation so politically, geographically and socially divided that seven in 10 Republicans say the election was stolen from Donald Trump.’

‘[A]n almost total shutdown of the heart of American governance.’

‘Even before the assault on Capitol Hill, Biden warned that deepening partisanship was a threat to the stability of the United States.’

‘”The country is in a dangerous place,” he said during the election campaign. “Our trust in each other is ebbing. Hope is elusive. […]”’

‘The enormity of the challenge was made starkly clear by the sacking of the Capitol. Most Americans recoiled in horror at the sight of their compatriots, some dressed as if ready for war, smashing up congressional offices, beating police officers and threatening to hang the vice-president.’

‘Yet more than 70% of Republicans agree with the protesters’ core claim that November’s election was rigged and say Biden is not the legitimate president.’

‘“We are so polarised that polarisation is not going to go away no matter what he [Biden] does in the short term,” said Charles Franklin, director of the respected Marquette opinion poll in swing state Wisconsin.’

‘[L]arge numbers of Americans continue to believe the system does not work for them.’ (‘America is broken – can Biden and Harris put it back together?’, January 17, 2021)

With this condition, the empire’s external reach will not be as smooth as the Libya or Iraq invasion days. This condition will make the empire more desperate. It will find, as it always finds, interference and war are the real businesses that bring benefit to it.

It, therefore, can be assumed that the coming days will hear more ‘concerns’, ‘suggestions’, ‘calls’, ‘demands’, and — machinations, sanctions, etc — from the empire, and the days will be more charged as neocons with experiences of intervention have reassembled to face the situation. A desperado-game it will be.