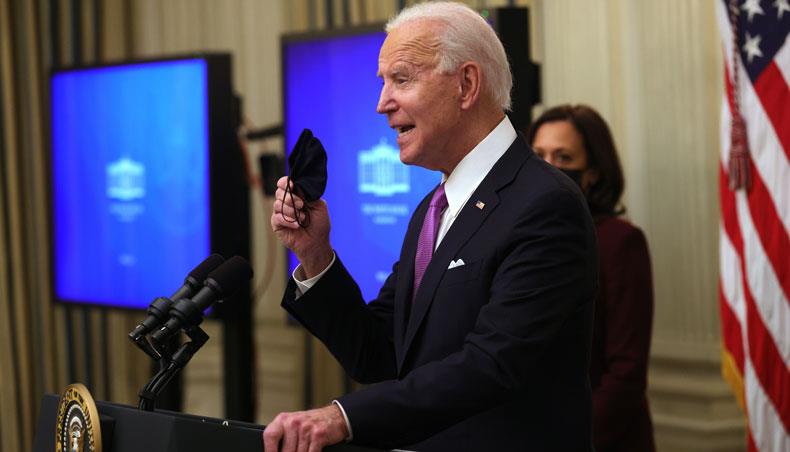 US president Joe Biden holds up a mask as vice-president Kamala Harris looks on during an event at the State Dining Room of the White House January 21, 2021 in Washington, DC. — AFP photo

President Joe Biden on Thursday tightened mask wearing rules and ordered quarantine for people flying into the United States, as he got to work on tackling the coronavirus pandemic on his first full day in power.

Signing 10 executive orders in the White House, Biden told the nation that the COVID-19 death toll would likely rise from 400,000 to half a million next month – and that drastic action was needed.

‘We’re in a national emergency. It’s time we treated it like one,’ he said, adding that he wanted to restore public trust in the wake of the divisive Donald Trump era.

Scientists, he said, will ‘work free from political interference’ under his administration, and he pledged: ‘We will level with you when we make a mistake.’

In addition to needing a negative COVID-19 test result before flying, travellers to the US will now need to quarantine upon arrival, Biden said. This toughened existing regulations under Trump.

Wearing masks ‘has become a partisan issue, unfortunately, but it’s a patriotic act,’ Biden said, in a marked contrast to Trump, who for months gave mixed messages about whether or not to encourage the practice.

Although vaccines were produced at a blistering speed in Trump’s final year in power, the rollout had been chaotic.

‘What we’re inheriting is so much worse than we could have imagined,’ Jeff Zients, the new White House COVID-19 response coordinator, told reporters.

Biden had announced a goal of 100 million vaccines administered in 100 days, with his top experts saying it remained possible. So far, only 16.5 million doses have been injected.

When asked on Thursday if he had been ambitious enough, Biden shot back: ‘When I announced it, you all said it’s not possible. Come on, give me a break, man.’

Biden said that the administration was expanding places where Americans will be able to get their doses, with new community centres and extra medical staff to administer the vaccine.

He had also restored top infectious diseases doctor Anthony Fauci to a leading, visible advisory role in the White House, after Trump complained about the expert’s warnings on COVID-19.

Fauci, a regular presence in the White House before being effectively banished, was back in the briefing room Thursday – also pushing the message that public trust should be rebuilt.

‘One of the things we’re going to do is to be completely transparent, open and honest if things go wrong,’ he said, noting he had discussed this with Biden minutes earlier.

‘The idea that you can get up here and talk about what you know it is somewhat of a liberating feeling,’ Fauci said.

The pandemic had overshadowed the Biden administration from its first moments.

Only a few spectators were allowed to attend his swearing-in on Wednesday and everyone, from the military band to his wife Jill, looked on from behind face masks.

Biden and his vice-president, Kamala Harris, began their day on Thursday by participating in a traditional inaugural prayer service which also had to be conducted virtually, because of the coronavirus.

The flood of executive orders and other directives which Biden began signing immediately on Wednesday had likewise focused mostly on his new national mask and vaccination strategy.

In addition, he was bringing major firepower to trying to get a massive stimulus bill through Congress to help Americans.

He faced multiple other challenges, including the aftershocks of a giant government computer hack blamed on Russia, and searing Trump-era political tensions – an issue that could soon take centre stage in a Senate impeachment trial of the ex-president.

Other fronts that Biden had opened include new protections for so-called ‘Dreamers’ – children of illegal immigrants who have now grown up in the country and had been shielded from deportation.

Yet another big blast at his predecessor’s record was to immediately put the United States back into the Paris climate accord.

Although Biden won comfortably at the polls on November 3, Trump’s efforts to persuade tens of millions of followers that the election was stolen has left the veteran Democrat with a hostile opposition.

Democrats now control both chambers of Congress, but the existing majority in the House of Representatives narrowed in the November election.

In the Senate, the two parties are split 50-50, with a tie-break vote by the new vice-president giving Democrats the most razor-thin of margins.

That landscape ensures Biden’s administration an uphill climb to get things moving. Even confirmation of his cabinet nominees risks getting tied up.

Transportation secretary pick Pete Buttigieg, a former rival of Biden in the fight for the Democratic presidential nomination, appeared for a Senate confirmation hearing on Thursday.