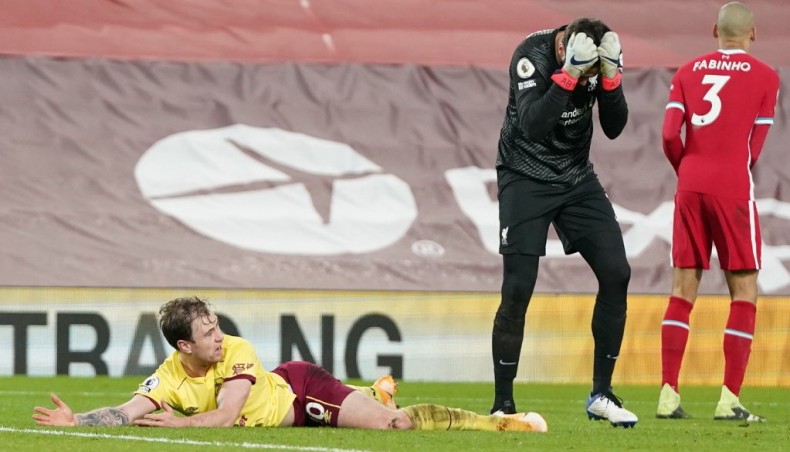 Liverpool's 68-game unbeaten run in the Premier League at Anfield came to a stunning end as Ashley Barnes's late penalty earned Burnley a 1-0 win on Thursday.

Jurgen Klopp's men have now failed to win in five consecutive league games to see their title defence collapse as they remain six points behind leaders Manchester United in fourth.

Burnley began the game just one place above the relegation zone, but gave their chances of beating the drop a huge boost when Barnes was tripped by Alisson Becker seven minutes from time and then beat the Brazilian from the spot.

Liverpool had not tasted a league defeat at Anfield since April 2017.

Since then the Reds have ended a 30-year wait to win a league title, but their chances of repeating that feat are fading rapidly after a disastrous run over the past month.

Despite a host of defensive injuries, it has been scoring goals that has cost Liverpool of late as they failed to score for a fourth straight league game.

But Divock Origi failed to take his chance with a rare start as the Belgian wasted his side's best opportunity midway through the first half when he smashed off the underside of the bar when one-on-one with Nick Pope.

Salah and Firmino were introduced early in the second half, but Burnley held out despite incessant Liverpool pressure as Pope saved brilliantly from Salah before Firmino showed why he has struggled for goals all season by slicing horribly wide from Andy Robertson's inviting cut-back.

Burnley had scored just once themselves in their last four games.

But Sean Dyche's men took advantage of indecision in the Liverpool defence when Alisson upended Barnes, who coolly slotted home Burnley's first penalty of the season.

Firmino missed another golden opportunity to salvage a point and Liverpool's long unbeaten run, but Ben Mee diverted his effort off the line.

After Sunday's 0-0 draw with United, Klopp claimed Liverpool's focus had to be on a top-four finish rather than the title given their current form.

And the champions could find themselves down in seventh by the time they are next in league action away to Tottenham next Thursday.