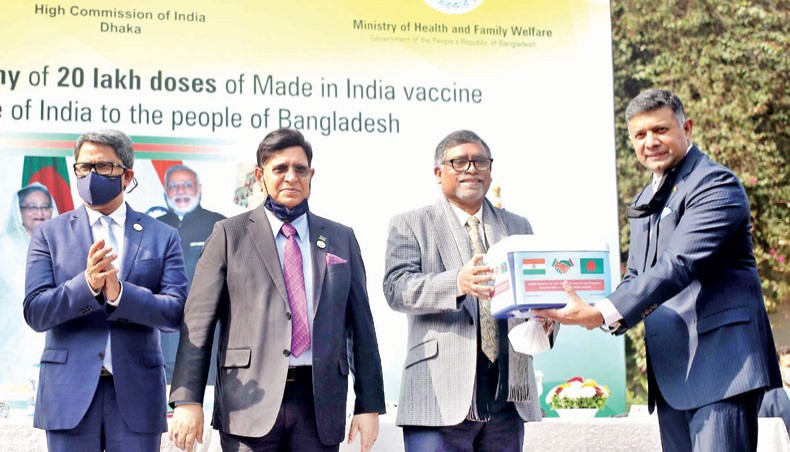 Indian high commissioner Vikram Doraiswami hands over a box of coronavirus vaccine to health minister Zahid Maleque during a ceremony at the state guest house Padma in Dhaka on Thursday on the occasion of giving 20 lakh doses of a COVID-19 vaccine from India to Bangladesh. — New Age photo

Bangladesh on Thursday received 20 lakh doses of the Oxford-AstraZeneca COVID-19 vaccine as gift from India, with the country planning to begin its mass vaccination early February.

A total of 500 healthcare providers in four selected hospitals in the capital will be vaccinated for observation for a week before the mass immunisation against COVID-19 is rolled out.

The country is expected to get 50 lakh doses of the Oxford-AstraZeneca vaccine manufactured by the Serum Institute of India by January 25 under a deal on buying three crore doses from the Serum through its local vendor Beximco Pharma.

‘I request the Indian government to deliver the 30 million [three crore] doses of the vaccine on time,’ health minister Zahid Maleque said while receiving the 20 lakh doses from Indian high commissioner Vikram Doraiswami in an event at the state guest house Padma on Thursday.

The government would conduct a trial-run of the vaccine by the current month for launching its COVID-19 immunisation programme preferably early February, the health minister told journalists after the programme.

The schedule for the trial-run and the immunisation programme would be finalised in consultation with the prime minister, he said.

While speaking in the function, the health minister requested the Indian government for delivering the three crore doses of the COVID-19 vaccine on time for meeting need of the people here.

‘The government is in an arrangement on getting 30 million doses of the vaccine. I request the Indian government to deliver the vaccine on time,’ he said.

A consignment of 50 lakh doses of the COVID-19 vaccine is scheduled to be delivered by January 25 under an arrangement made with India, he said.

The consignment of 2,00,000 the Covishield vaccine produced by the Serum Institute of India reached Dhaka by a special  flight from Mumbai on Thursday morning. Each vial contains 10 doses.

The consignment was preserved at the Central Medical Stores Depot, according to the health minister.

State minister for foreign affairs M Shahriar Alam and health secretary M Abdul Mannan were, among others, present in the state guest house function in the capital.

The Bangladesh government has signed a tripartite contract to procure three crore doses of the Oxford-AstraZeneca vaccine Covishield at the price of US$4 for each dose.

The government is set to pay a price 47 per cent higher than that the Indian government has paid, according to the health rights groups.

In addition, Beximco Pharma will take US$1 extra for each dose to carry the vaccine from Serum’s warehouse in India to the government facilities in Bangladesh.

About 7,300 teams comprising 42,000 volunteers would vaccinate the people at government health facilities alone across the country.

The government would monitor the vaccine side effects in recipients for half an hour at the health centres and would offer telemedicine support to the vaccine recipients, health secretary Abdul Mannan said on Wednesday.

The vaccination in the capital will be followed by that in districts and upazilas, said officials.

The vaccine recipients have to register them using the government-developed mobile app ‘Surakkha’. The app will be opened for the public on January 26.

Bangladesh under the deal with the Serum Institute of India would get three crore doses of the vaccine by June.

Being a low-income country, Bangladesh would also get 68 million doses of COVID-19 vaccines from the global vaccine alliance GAVI under a World Health Organisation initiative named COVAX to ensure access to vaccines by the poor countries.

Bangladesh has allowed private import and use of COVID-19 vaccines alongside the government’s mass vaccination campaign.

Till now Beximco Pharma alone has got the approval from the government while several other private entities have also sought the approval.

Health minister Zahid Maleque in the past week said that the government was working to prepare a guideline for the private use of the vaccine.

On Wednesday, health secretary Abdul Mannan said that none would receive the vaccine shots, even from any private source, unless registering them through the government app.

According to experts, the government has to properly communicate to the people in order to conduct a smooth vaccination programme.

‘Two situations might occur now – people might get aggressive to receive the vaccine while there are possibilities that the vaccine would be rejected,’ said Nazrul Islam, a public health expert and former vice-chancellor of Bangabandhu Sheikh Mujib Medical University.

Those people not in the priority list of vaccine recipients may feel deprived, meaning that the government will have to ensure enough vaccine doses to meet the demand, he said.

On the other hand, with possible public suspicion of COVID-19 vaccine side effects people might decline to be vaccinated, said Nazrul, also a noted virologist.

‘The government has to properly convey the people about the vaccination considering these two possible situations,’ he said.

Tens of thousands of people have skipped inoculation in India, where immunisation with the Oxford-AstraZeneca vaccine began on Saturday, according to media reports.

In Bangladesh, social media platforms have abounded with users expressing fear of adverse effects of the vaccine, with many stating that they will not take the shots.

Bangladesh Health Rights Movement president Rashid-e-Mahbub said that getting a COVID-19 vaccine would be a public right now.

The government has to ensure a timely arrival of the vaccines and explore other sources of vaccines the demand for which has skyrocketed globally, he said.

Health minister Zahid Maleque urged all to refrain from ‘doing politics’ by spreading rumours over the vaccine.

The National Board of Revenue has waived the advance income tax on the COVID-19 vaccine the country has received as gift from India.

The AIT at the rate of 5 per cent will not apply to the vaccine doses as the government, which is not a taxable entity, has received them, the NBR income tax wing on Tuesday informed the Directorate General of Health Services.

The NBR has taken the decision after the Directorate General of Health Services sought waiver of the tax on the vaccine doses.