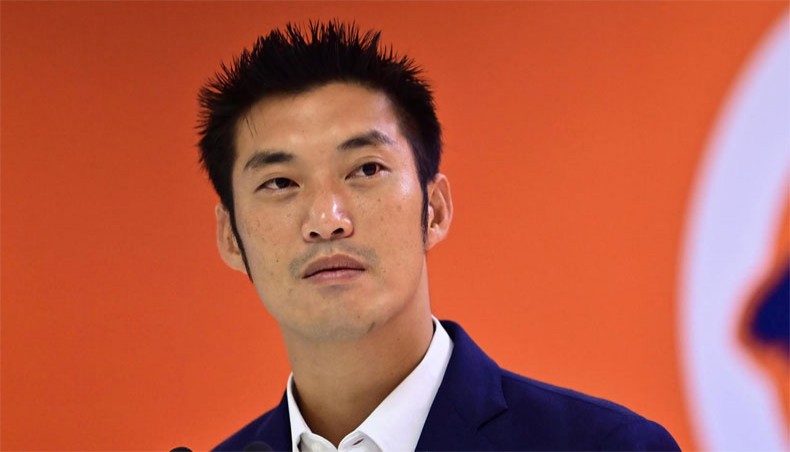 A billionaire Thai opposition figure accused of defaming the country’s monarchy has vowed to keep campaigning for reform, despite facing what he dubbed a ‘politically motivated’ lawsuit.

Those convicted under Thailand’s strict royal defamation laws can face up to 15 years in jail per charge, and earlier this week a former civil servant was sentenced to more than 43 years for sharing audio clips deemed defamatory to the monarchy.

Thanathorn Juangroongruangkit, founder of the now-dissolved Future Forward Party, is facing legal action over a video he posted Monday criticising the government’s vaccine strategy.  ‘The time and resources that go into managing these (legal cases) is huge. I think it’s one of the tactics they are using against us...  They want us to lose focus,’ Thanathorn told reporters in Bangkok on Thursday.

‘But no, I refuse to surrender. They will not succeed.’

Describing the case as ‘politically motivated’, he added that he had never fallen foul of the law in Thailand in the 40 years before he entered politics; but after ‘two years of my political life, I have uncounted cases’.

In Thanathorn’s video, he raised questions about whether Thailand’s vaccination campaign is too reliant on Siam BioScience, which is owned by the Crown Property Bureau — a body that manages the royal family’s multi-billion-dollar fortune.

The video drew the ire of Thailand’s Ministry of Digital Economy and Society, which on Wednesday filed a royal defamation complaint against him.

‘What Mr. Thanathorn said is not the truth; the facts have been distorted,’ ministry representative Tossapol Pengsom said.

Ostensibly meant to shield the royal family from defamation, insults or threats, the law — section 112 of the penal code — is routinely interpreted to include any criticism of the monarchy.

The use of the law slowed in 2018 until late last year, when Thai authorities moved to level charges against leaders involved in mass pro-democracy protests calling for the prime minister’s resignation, and most controversially, reforms to the monarchy.

Thai Lawyers for Human Rights says at least 43 protesters have been charged with royal defamation since last November.

Thanathorn — who threw his support behind Thailand’s pro-democracy movement when mass rallies kicked off in mid-July — is the highest-profile target since the spike in the law’s use.