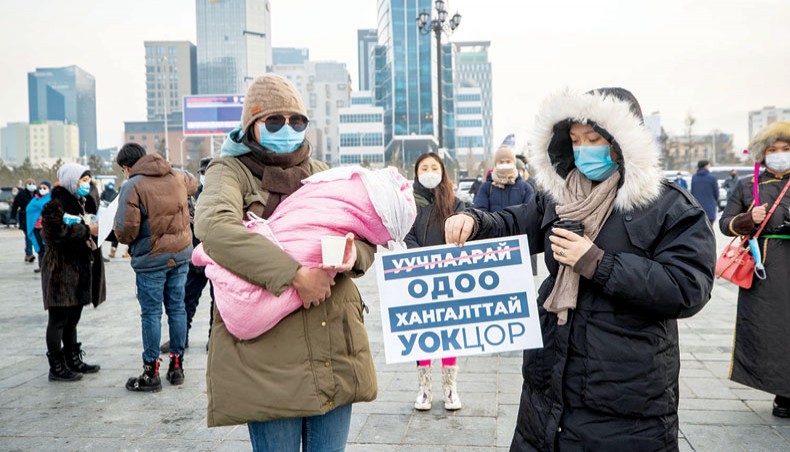 A protester carrying a 2-month-old baby while another holds a sign urging officials of the national emergency commission to resign, during a rally at Sukhbaatar square in Ulaanbaatar, the capital of Mongolia on Thursday. — AFP photo

Mongolia’s prime minister resigned Thursday following protests and public outrage over the treatment of a coronavirus patient and her new-born baby.

Anger mounted this week after TV footage showed a woman who appeared to have recently given birth being moved to an infectious disease centre wearing only hospital pyjamas and plastic slippers, despite temperatures dipping to minus 25 degrees Celsius.

After protests outside government buildings on Wednesday, the Mongolian politician apologised on behalf of the government and said he would stand down immediately.

‘Unfortunately, we made mistake during relocating that mother,’ admitted prime minister Khurelsukh Ukhnaa Thursday. ‘It was heartbreaking to see how she was treated.’

‘As a prime minister, I must take the responsibility.’

The video of the woman in an ambulance clutching her baby prompted fierce criticism, particularly as Mongolian tradition dictates new mothers should avoid the cold weather and cold food for the first month after birth.

On Wednesday around 5,000 mostly young protesters gathered in a square opposite government buildings in the capital Ulaanbaatar, some carrying wrapped up bundles to represent babies.

Ulziibayar Purevsuren, 30, held a banner reading ‘resign’ and said she was there to complain about ‘incompetent doctors’.

The vice prime minister — also head of the national emergency commission handling the pandemic — had already resigned on Wednesday evening, followed by the minister of health.

The head of the hospital and disease centre in the middle of the row also resigned.

The row is the latest clash over the government’s handling of the outbreak as anger simmers over Mongolian nationals stuck overseas after the country closed its borders.

‘I don’t think Mongolians will die of COVID-19, instead they will die of poverty and hunger,’ said 20-year-old student Odbayar Lkhagvadorj.

‘We are here to make our voice heard,’ said Batzul Batenkh, a 21-year-old mining worker.

Restrictions on movement between provinces have been imposed since November, leaving about 80,000 people stranded in the capital.

Many have complained of waiting weeks for virus tests to allow them to return to their homes or of having to sleep in their cars with hotels closed due to lockdowns.

Officials were forced to apologise when a 58-year-old woman died in December after being refused entry to a hospital because she did not have a negative COVID-19 test result.

Since March, Mongolia has only allowed citizens to enter the country on chartered flights and required 21 days of quarantine in centralised facilities, followed by two weeks of further isolation at home.

There have been 1,584 coronavirus cases in the country so far and just three deaths.