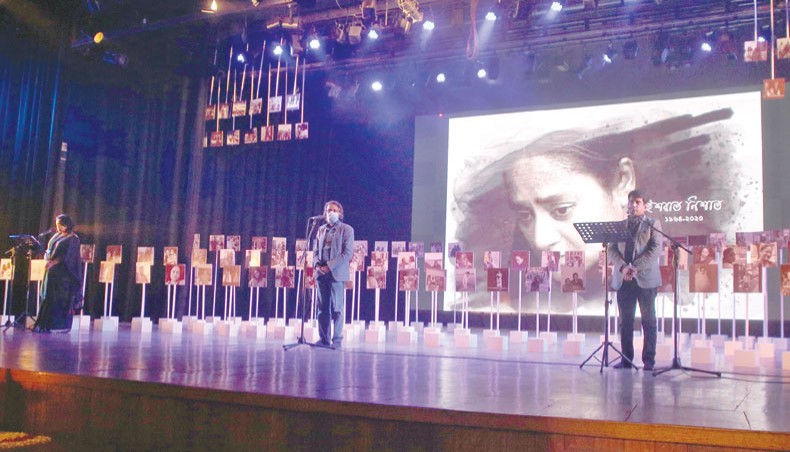 Theatre troupe Desh Natok arranges a programme to commemorate the life and works of Ishrat Nishat at the National Theatre Hall of Bangladesh Shilpakala Academy on Wednesday.

The programme began with guests placing flowers at a portrait of Ishrat Nishat at the lobby of the National Theatre Hall. Following which, the guests and organisers observed one minute silence in memory of Nishat.

A video on the life and works of Ishrat Nishat was also screened at the venue.

‘Ishrat Nishat was a founder of Desh Natok and was leader of the troupe till her death. She arranged many events to promote theatre among the people. We introduced an award named after her,’ said Kamal Ahmed.

‘It is not easy for a woman to pursue theatre activities in our country. Nishat always thought about the theatre arena and the welfare of theatre artistes. Many girls were inspired by Nishat to pursue theatre. Her death has left a huge void in the country’s theatre scene,’ said Lucky Enam.

‘Nishat made huge contribution to local theatre scene. She was well-versed in the nitty-gritty of theatre productions. She also participated in movements protesting at social anomalies,’ said  Nasiruddin Yousuff.

‘Nishat had participated in different major cultural movements. I knew her since childhood. She will live on through her works. It’s our responsibility to promote her works,’ said Ataur Rahman.

‘I had spent a lot of time with Nishat at Aryanak Natyadal. Nishat always raised her voice against injustice. She was a straightforward and fearless person. She always evaluated our works and provided constructive criticism,’ said Mamunur Rashid.

‘Nishat was like a daughter to me. Her father was a close friend of mine. She led a simple life and always thought about promoting theatre. She will be remembered through her works. I urge the younger generation to follow in her footsteps,’ said Asaduzzaman Noor.