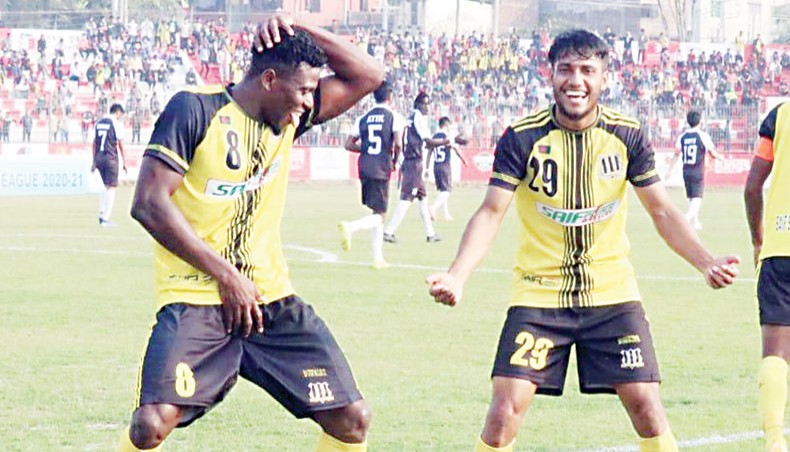 Chittagong Abahani clinched their first win of the Bangladesh Premier League when they beat Arambagh Krira Sangha by 1-0 goal in their second match at the Bangabandhu National Stadium on Thursday.

Nixon’s right-footed strike from inside the box off a cross from Nigerian Forward Idenyi Chinedu Mathew entered into the Arambagh net in the 30th minute.

At Cumilla, forward Arifur Rahman and Nigerian midfielder John Okoli scored one goal apiece for Saif while Japanese midfielder and captain Uryu Nagata reduced the margin for Mohammedan with a single strike.

Arifur gave Saif the lead with a right-footer, utilising a short pass from Nigerian forward Kenneth Ikechukwu in the 44th minute.

Nigerian midfielder Okoli doubled the margin in the injury time of the first half while Nagata pulled one goal back for Mohammedan with a header off a free-kick from midfielder Habibur Rahman in the 60th minute.

In the day’s third match at the BNS, Gambian defender Pa Omar Jobe and his compatriot and captain Solomon King scored one goal each for Sheikh Jamal while substitute forward Mahadi Hassan reduced the margin for Muktijoddha.

Omar Jobe gave Jamal the lead in the 38th minute with a poke in from a goalmouth melee before Solomon doubled the margin with a right-footed drive in the 60th minute.

Mahadi, who came in the place of Cameroonian forward Christian Bekamenga Aymard, reduced the gap with a striking header off a long cross from defender Sujon Mia in the dying seconds of the match.