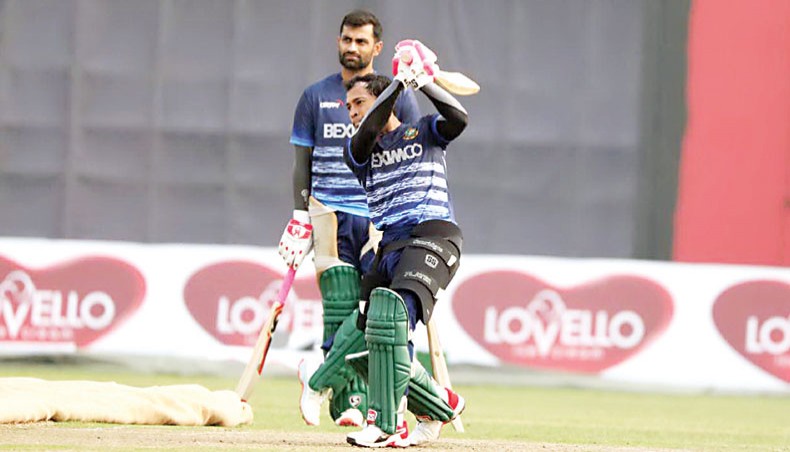 Bangladesh batsman Mushfiqur Rahim plays a shot as captain Tamim Iqbal looks on during a training session at the National Cricket Academy Ground in Mirpur on Thursday. — BCB photo

Bangladesh has the chance to complete their third straight bi-lateral series win over West Indies in one-day internationals today when both sides take the field for the second ODI of the three-match series at the Sher-e-Bangla National Stadium.

Bangladesh earlier beat the Caribbean side 2-1 in two ODI series’ in 2018, one away and one at home, and are leading the ongoing series 1-0 with a six-wicket win on Wednesday.

Bangladesh pacers Hasan Mahmud and Mustafizur Rahman set up the win in the first match by taking five wickets together to bundle out West Indies for only 122.

Hasan, who made his ODI debut in the match, took three wickets and at one point was on a hat-trick after taking the wickets of Rovman Powell and Reymon Reifer in back to back deliveries.

Bangladesh national team pace bowling coach Ottis Gibson was happy with his success on debut but was not surprised.

‘He [Hasan] didn’t surprise me at all, that’s why we picked him. We have seen the progress that he has made. He has been with us now probably for the last 12 months since Pakistan last year. We have seen him develop nicely,’ Gibson said on a virtual press conference on Thursday.

‘So, it was good that he got his opportunity. Three wickets in his debut is a good reward for the hard work that he has been putting in,’ he added.

Mustafiz, who looked close to his best in the Bangabandhu Twenty20 Cup after a lengthy lean patch in international cricket, looked lethal against the Caribbean side.

The left-arm pacer stunned Sunil Ambris with an in-swinger, a delivery that Mustafiz was trying to acquire for a few years, and trapped him leg before wicket to give Bangladesh an early breakthrough.

Gibson said that they have been working on that particular delivery in the training sessions and is confident that the 25-year-old will be using that delivery regularly from now on.

‘He [Mustafiz] has worked really hard… We have tried to get the ball swinging back. We have worked on many different things with his wrist position. When he gets it right, he has proved it to himself that he can swing it back in.

‘Hopefully he will go from strength to strength and get better. More balls, in coming matches, you will see swinging back in,’ said the bowling coach.

Alzarri Joseph, a young Caribbean pacer who has the fond memory of winning the 2016 Under-19 World Cup here in Dhaka, said that the visitors are ready to fight back in the second match to keep the series alive.

‘Everyone is aware of what’s at stake. Everyone is pumped up to give a better showing in the second ODI. It is really important for us to come in.

‘This game is even more important than the last one. If we lose this game, it’s the series. Everyone knows exactly what they need to do,’ said the pacer who is two wickets short of completing half-century in ODIs.