In the absence of the political 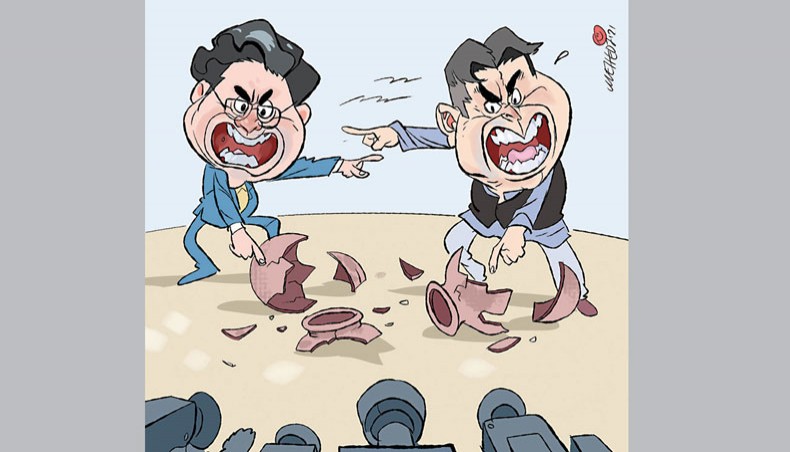 ‘Party squabbles are occasionally on public display, and there is a frantic and continuous politics among factions of the party, interest groups, competing corporate powers and rival media concern…. What is absent is the political, the commitment to finding where the common good lies’.

PARTY squabbles, even the most intense ones, among factions of a party and among different influential quarters by rule suggest an absence of politics, an absence of the political that is expected to be defined and informed by a commitment to bettering people’s lives. Bangladesh’s political landscape has  in the past decade seen an alarming increase in depoliticisation, accompanied by a corresponding increase in squabbles within the ruling party — the Awami League.

When pro-people politics, which commits itself to finding ways for bettering lives of the people, has virtually waned and faded from the political landscape, diverse vested interests having political connection and clout appear to have growingly been fiercely competitive among themselves to promote their self-interests.

The interests are, as always and usual, can be pinned down to the interest of money-making, to using political platforms and public agencies to further money-making. All party squabbles, in turn, can be reduced to conflicts over gaining control over the political space and platforms that can help the actors to pursue their self-interests.

In the past decade in Bangladesh, when there has been almost no meaningful and substantial opposition to the ruling party, squabbles among insiders of the ruling party have come to be frantic and continuous. From small-scale squabbles, often entailing murder and serious injuries though, over the control of college and university campuses among factions of the students wing of the ruling party to fights among party members for nomination to and selection for political and other positions are what have come to characterise the current political space. It is unnecessary to mention examples of such party squabbles. One cannot but notice the nature and meaning of the squabbles that are wildly going on in the ruling camp.

Although redundant, the face-off between the incumbent and the immediate-past mayors, both belonging to the ruling camp, of Dhaka’s south is a glaring example of how intense party squabbles can become, even though the squabble appears completely devoid of ‘the political’. Such ‘apolitical and depoliticised’ squabbles pervade the political landscape today. It might appear, to some, that the face-off has political elements and interests — corruption allegations and other irregularities in activities of the city authorities — in them. In reality, these squabbles are but about establishing control by one and pushing the other out of the circle of the favoured.

Such squabbles owe their existence to an absence of politics, of democracy, which presupposes an active participation of the demos in policy-making and implementing. We have, it growingly appears, entered into a state of acute depoliticisation where the demos have almost completely been politically demobilised and the liberal class, known to have worked as a safety valve between the people and the government and to have pushed continuously for necessary, piecemeal reforms, has virtually been dead. Depoliticisation has come to be the de facto governing strategy, rendering the character of decision-making of public agencies and, above all, the government largely undemocratic and unresponsive to people’s demands.

While it is not difficult to see how business interests have come to take a political form and to ensure a political settlement that subscribes to business interests all over the world in the past half a century taking control of the state power in diverse ways, it is often overlooked that such a takeover of the political space by business interests has given rise to radical elements in society everywhere — be they in the form of white supremacy, religious extremism, parochial populism, nationalism or other forms of intolerance.

A growing number of people in such a situation is led to take shelter under one or another narrow, blinding patches of radical elements and philosophy, largely not knowing the long-run implications and consequences of their action. The number of people taking recourse to any of the narrow patches grows in proportion to, as political philosopher Sheldon S Wolin argues, depoliticisation and its consequent insecurity.

A depoliticised society is, to mention Wolin again, the least secure for the populace even though it might show all the semblances of uninterrupted development and an apparently acceptable state of the rule of law. But underneath the semblances, society is ruptured and people are disempowered, giving way to the rise of an oligarchy, a dominant coalition, comprising the overlapping political and business elites and members of the deep state and the bureaucracy — an oligarchy that takes its wings from depoliticisation, from the absence of true politics in society.

Bangladesh today appears to be marked by a precarious waning of the political and democratic space and spirit. With democracy reduced to elections, that too highly manipulated elections as is evident in the past two general elections and other local government elections, and with the demos turned to, at best, occasional voters, the country is faced with a political void. Also worrying is the growing pattern of the criminalisation of dissenting voices in an attempt apparently to silence any opposition to the government and government policies while such opposition was traditionally deemed to be a highly essential part of a functioning democracy. Such a criminalisation of dissent and a distancing of the demos from the political process, coupled with a deep-seated carelessness and an increasing political demobilisation of the citizenry, appear to have helped a sort of a ‘managed democracy’ to come to take a political form, leading to a surge in corruption, inequality and corporate-friendly policies.