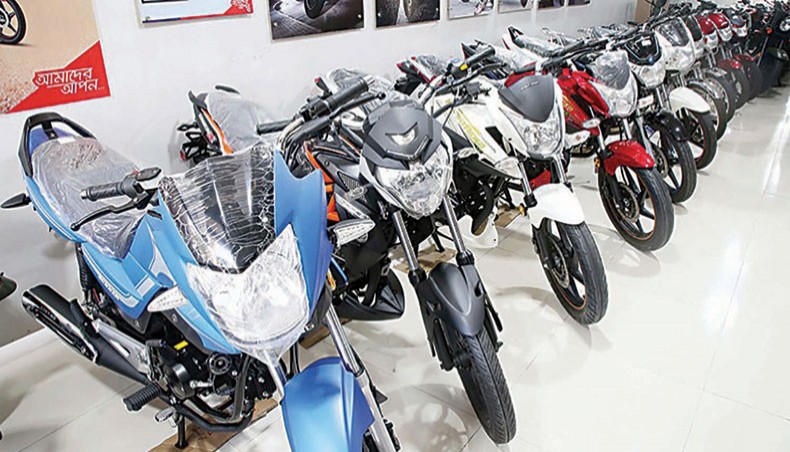 A file photo shows motorcycles on display at a showroom at Bangla Motors in the capital, Dhaka. The Bangladesh Trade and Tariff Commission has recommended the commerce ministry to gradually withdraw the restriction on import and production of motorcycles with higher engine capacity, measured in cubic centimetre, to flourish the domestic and export market.— New Age photo

The Bangladesh Trade and Tariff Commission has recommended the commerce ministry to gradually withdraw the restriction on import and production of motorcycles with higher engine capacity, measured in cubic centimetre, to flourish the domestic and export market.

‘Restriction on import and production of motorcycles irrespective of engine capacity should be removed to expedite expansion of the local motorcycle industry,’ it said.

Globally, no other country has such kinds of restriction in place, it added.

The BTTC made the recommendation in a report prepared at the instruction of the commerce ministry after the Motorcycle Manufacturers and Exporters Association requested the ministry to withdraw the limitation.

The commission in its report sent to the ministry on December 20, however, recommended for imposition of higher registration fees for motorcycles of above 165cc in order to protect local manufacturers.

BTTC member Shah Md Abu Raihan Alberuni on Thursday told New Age that they had made the recommendation in line with the global practice and provisions of the Motorcycle Industry Development Policy-2018 to boost the domestic industry and export market.

Withdrawal of the cc-restriction will help the country to tap into the export potentials in developed countries, including Europe, he said.

He also said that it would enhance the durability, functions and features of motorcycles as well as the security of bikers.

There is no scientific relation between higher engine capacity and the speed of a motorcycle, he added.

He said that the ministry had already held a meeting on the report and it would hopefully make the final decision after another meeting.

Trade officials said that the local motorcycle manufacturers had become divided over the proposal.

Some manufacturers are in favour of the restriction withdrawal while another group opposes the recommendation, they said.

The ministry will make its decision after scrutinising the positive and negative sides of the restriction, they said.

The ministry may initially withdraw the ban on 350cc motorcycles, they added.

According to the Import Policy Order 2015-2018, the import of motorcycles of above 165cc is restricted in the country, except for the police department.

Local production of motorcycles of above 165cc is also prohibited.

The BTTC in its report said that the decision would also help the country to increase the target contribution of the industry to 2.5 per cent of GDP by 2025, set in the policy, from the current 0.5 per cent and raise annual production to 10 lakh by 2027.

It will also encourage production of motorcycle accessories on the local market and their export, it added.

The local motorcycle industry has remained detached from the international market due to imposition of the restriction, it said.

The restriction also creates hindrance in expansion of the accessories industry, it added.

Earlier in August 2018, the ministry allowed Runner Automobiles Ltd to import raw materials and equipment for producing motorcycles of up to 500cc for export.