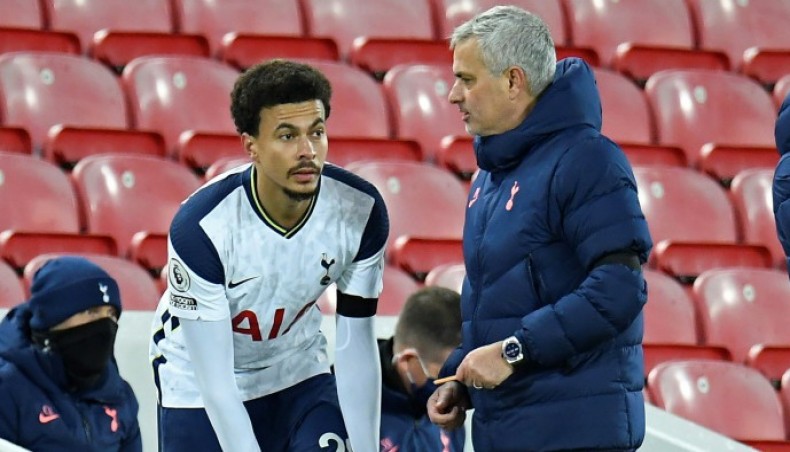 Tottenham Hotspur midfielder Dele Alli (L) could be on the move this month after limited playing time at under manager Jose Mourinho. — AFP photo

As the January transfer window enters its final stretch, Europe's top clubs are sitting tight with financial restraints exacerbated by the coronavirus pandemic leading to a downturn in player movement worldwide.

For the first time in a decade, the number of international transfers dropped from the previous year, by 5.4 per cent, as total transfer fees plummeted by almost a quarter -- a downward trend the direct result of the global health crisis, FIFA said in its annual report this week.

English clubs again dwarfed the spending of their rivals on the continent, accounting for $1.63 billion of the overall $5.63 billion outlay in 2020 -- more than double the combined $731.5 million paid by Italian clubs.

However, the Premier League's leading sides have been unusually quiet this month, keeping their powder dry in what is typically regarded as a seller's market and often a time for stopgap measures.

It is a pattern consistent across Europe, with the biggest move of the winter so far surprisingly Ajax's club-record 22.5 million-euro ($27.5 million) signing of Ivory Coast international Sebastien Haller from West Ham.

The transfer deadline is still more than a week off and tradition dictates activity ramps up in the closing days, but the increasingly perilous finances in the game suggest big-money signings are unlikely to happen.

‘I know perfectly well the financial limits at the club,’ said Barcelona coach Ronald Koeman, who may have to wait until the summer to sign defender Eric Garcia on a free transfer from Manchester City.

‘Any coach looks at January and thinks about how they can improve the team and I am the same.

‘What I have done is make a plan of outs and people that could possibly come in. If it's not possible we continue with what we have.’

New regulations for European Union nationals introduced under Brexit will further complicate matters, while French clubs are counting the substantial cost of the collapse of the league's TV rights deal with Mediapro.

With the 2019-20 Ligue 1 season curtailed and the loss of revenue from the absence of spectators, the league is scrambling to find a new primary broadcast partner to avoid additional damage after the dissolution of a record deal worth 800 million euros ($970 million) a year.

French clubs raked in $398.1 million from the sale of players to England in 2019. That figure fell to $216.4 last year following the outbreak of the Covid-19 pandemic, and challenges posed by the new points-based system in Britain could reduce business even more.

‘After Covid and Mediapro, it's sort of like the third layer on the bread,’ said Stephane Canard, president of the National Union of Sports Agents.

The union that represents France's top-flight clubs, Premiere Ligue, believes the shake-up -- which will prevent English clubs from signing players under the age of 18 from abroad while capping overseas transfers -- could change some things for the better at home.

‘It's going to force French football to think up another model, and it's perhaps an opportunity. We can maybe keep our young players a little longer, give them longer contracts,’ the union said.

The Premier League's net spend of around £800 million last summer was the second-highest on record in a single window, but the continuing absence of supporters has left the biggest clubs desperate to offload players to trim bloated squads and cut wage bills.

Aston Villa are reportedly in negotiations over Marseille midfielder Morgan Sanson, but some of the most notable moves include Mario Mandzukic joining AC Milan as a free agent and Mesut Ozil heading to Fenerbahce after being frozen out at Arsenal.

Borussia Dortmund's Erling Braut Haaland is a man in demand and Dele Alli could be set for a reunion with Mauricio Pochettino at Paris Saint-Germain, but it remains to be seen how far clubs are willing to extend themselves this month given the numerous obstacles working against them.